T o meet the celebrated artist-jeweller Wallace Chan is to come face-to-face with the confluence of old and new, East and West, tradition and modernity, and art and craft that gives Hong Kong, his home, its unique character.

While Chan may appear the embodiment of old-world Hong Kong, with his traditional clothes, long beard and inscrutable demeanour, he also personifies the futuristic technical advances and virtuosity that have catapulted him to global renown as one of the most innovative artist-craftsmen of modern times. Chan has revitalised the ancient Chinese art of stone carving and at the same time explored and perfected the use of the space-age metal titanium and wondrous gem-setting techniques. In doing so, he introduced an entirely new visual language and palette of melting metallic hues and tones to the world of jewellery. Today, looking back, he says: “You have to embrace the past in order to inspire the future.”

Aged 16, Chan was apprenticed to a traditional stone carver, but suffocated by the restrictions, he soon struck out on his own, working at first with minerals and hardstones before moving onto gemstones. Gradually he absorbed Western influences – he was profoundly affected by a book on the sculptures of Michelangelo that he found in a second-hand bookshop.

In 1987, after several years of study and experimentation, he invented the Wallace Cut, a carving technique which creates a hologram-like illusion by combining intaglio with careful faceting. Since that time he has gone on to use his exceptional skills to give new creative expression to 21st-century jewels.

In the last several years, Chan’s reputation has grown – the jewels are sought by collectors across the globe, and he’s been a presence at major fairs including Tefaf in Maastricht and Masterpiece in London. Chan was the first Asian artist-jeweller to exhibit at the Biennale de Paris, in 2012, and the first to be invited to exhibit and give a talk at the Gemological Institute of America in California.

The Wallace Chan masterpieces offered for sale in Hong Kong this October demonstrate his supreme mastery, with high drama and emotionally-charged artistry coming together to conjure jewels that are daringly dreamlike, sensual and sculptural. Chan’s beloved jade is found in one pair of pendent earrings, while the rolling rhythm of the choker’s diamond-set and agate circles are echoed in meticulously carved discs of rock crystal; and the monumental Tanzanite of the ring, enveloped in its gem-set cocoon, tells of Chan’s audacity of scale.

Both poetic and provocative, these creations push the boundaries of imagination, craftsmanship and the art of the jewel.

Vivienne Becker is a jewellery historian and a contributing editor of the Financial Times’s How to Spend It . 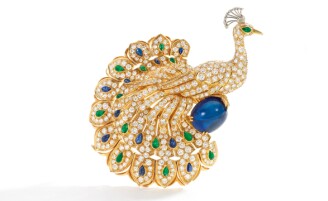