A major portrait by the Dutch painter Kees van Dongen will go on sale in the forthcoming Art Impressionniste et Moderne sale in Paris on 24 March. Femme au chapeau depicts the wife of one of his greatest supporters and patrons, Charles Malpel, a lawyer from Montauban who took great interest in art theory, history and critique. The present work was painted at a time of recognition for the artist: following the scandal of his first Fauvist works exhibited at the Salon d'Automne in 1905, van Dongen developed his style, modulating the chromatic violence of his first works.

The theme of the woman dominated van Dongen's art at this time. However, commissioned portraits were still rare, and the painter favoured portraits of his close friends, as well as representations of cabaret artists, prostitutes and circus acrobats.

Malpel was then one of the most important supporters of the artistic avant-garde in South West France, eager to develop a centre for artistic creation in Toulouse comparable to those being developed in other European cities. Endowed with a visionary gaze, he organised several major exhibitions for the public in the salons of the newspaper Le Télégramme, including an important Toulouse-Lautrec retrospective in 1907, and in January 1908, the first solo show of van Dongen's work to take place in the province, comprising 64 works, several of which belonged to Malpel. In March of the same year, Malpel again exhibited several of van Dongen's works alongside other fauvist artists such as Albert Marquet and Raoul Dufy.

Charles Malpel had already at this time managed to bring together an audacious collection, beyond the ten or so paintings by van Dongen from the years 1905–06 (including le Chapeau aux cerises 1905 or the provocative and incandescent Manège de cochons, 1904–05), he collected the Fauve works of Dufy, Marquet and Derain but also of Toulouse-Lautrec, Brancusi and Signac, and notably, was one of the first collectors to buy Picasso's work from his pre-cubist period.

Van Dongen painted a portrait of Charles Malpel himself in 1908, a dynamic work painted with an incredibly spontaneous brushwork, and three portraits of his wife: one full-face and half length; another as a Spanish woman painted in bright reds (in front of which van Dongen was photographed in his studio on the rue Saulnier in 1909) and perhaps the most arresting of the trio, Femme au chapeau. The first two paintings were purchased by Charles Malpel who hung them in his bedroom alongside Bal by Picasso.

Carrying already the seeds of the qualities of the man who was to become the portrait painter of Parisian society after the First World War, Femme au chapeau is still fully part of van Dongen's Fauvist period. The theatrical lighting of the face, the vigorously thick facture, the sumptuous colors and irregular, vibrant contours make this painting a portrait of radical modernity. Upon seeing his works in a 1908 exhibition at the Kahnweiler gallery, a critic from the New York Times declared: "the women he paints are endowed with such melancholic beauty that the enthusiasts stay captivated for hours in front of them." 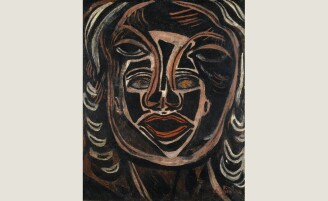