A mong the highlights of the upcoming Old Masters Evening sale in London on 5 December are two portraits by Van Dyck of Charles I’s eldest children – an 11-year-old Charles II, then Prince of Wales, and his 9-year-old sister Mary, the Princess Royal, the mother of the future king William III. These fresh-to-the-market portraits are among the very last works that the artist painted for his royal patron and have been in the same private collection for nearly a century.

Painted in the summer of 1641, just months before the artist’s death, these charming, beautifully preserved portraits epitomise the extraordinary skill which Van Dyck brought to child portraiture, a genre in which he had excelled ever since his early years in Genoa. Both works provide a penetrating likeness of the royal children at a time when their world, and the Stuart monarchy, was on the brink of collapse.

Appointed ‘Principal Painter in Ordinary to Their Majesties’ in 1632, Van Dyck created numerous portraits of Charles I, his wife Henrietta Maria, and their children, many of which still remain in the British Royal Collection. Depicting his sitters with a relaxed elegance and understated authority, Van Dyck’s sophisticated style dominated English portraiture until the end of the 18th century.

The Portrait of Charles II is a unique likeness of the young prince and one of the finest royal portraits of Van Dyck’s late career. Depicting the future heir to the throne standing in armour, this portrait marks a distinct shift in the representation of the young Prince. Moving away from the celebrated child portraits painted alongside his siblings, the portrait exudes a more martial and adult gravitas, both in accoutrements and bearing.

Painted shortly after her marriage to Prince Willem of Orange, aged just nine years old, the portrait of Mary, Princess Royal is the last of the artist’s likenesses of the young princess. Mary is depicted wearing a fine orange silk dress edged with lace tied with blue ribbon, and both her wedding ring and the large diamond brooch given to her by her husband the day after their wedding. Her son, Willem III of Orange, later succeeded her brother Charles II and was crowned King William III of England in 1689.

On 13 August 1641, shortly after the Princess’s marriage to Willem of Orange, the Countess of Roxburgh, Lady of the Bedchamber to the Queen and Preceptress (or Governess) to the royal children, wrote to Jan de Brederode, Ambassador Extraordinary of the Dutch States General to London , about a delay in dispatching the portrait of ‘your Royal Highness’ by van Dyck. The artist had been ill since the Ambassadors had left London, she explained, and she ‘hadn’t, until this hour, been able to see the portrait that he was doing for Monsieur le Prince. But he promised the Queen that he would have yours ready in eight days; and that he wished to present it to her himself with another he was doing for Madame the Princess of Orange’.

The colour of the Princess’s dress in the present painting has been consciously changed from the coral pink with white ribbons – as worn on her wedding day – seen in the other two versions of this portrait (Royal Collection and Private Collection, England). Here Mary’s dress is of a noticeably more orange hue, with blue ribbons at the waist and chest – the colours of the House of Orange-Nassau – strongly suggesting that this is the version that was painted for her new mother-in-law, the Princess of Orange, which is referred to in the Countess of Roxburgh’s letter.

Alex Bell, Sotheby’s Co-Chairman of Old Master Paintings, said: “Van Dyck was responsible for creating the enduring images of Charles I and his court, and in these exceptionally well-preserved portraits of his two eldest children we see the artist use his painterly skill to acknowledge both the youth and the status of his royal subjects. The tumultuous history of the Stuart court has always captured people’s imagination and with the additional interest sparked by the fascinating exhibitions in London this year, it is particularly timely for these royal portraits, which are extremely rare to the market, to come up for sale.’ 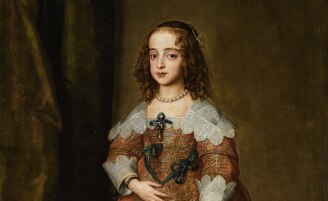