By Sotheby's
Following the success of the sale of the Royal Jewels from the Bourbon Parma family last year, Sotheby's is preparing to sell two more extraordinary jewels with fascinating histories.

T wo jewelry masterpieces, that belonged to influential and iconic women, will be offered in Sotheby’s upcoming Jewelry sale in Geneva on 14 May, combining prestigious provenance with exceptional craftsmanship that reflect key periods in jewelry history.

An Art Deco emerald and diamond necklace, created for the American socialite Hélène Beaumont in the 1930s, has been described by David Bennett, the Chairman of Sotheby’s Worldwide Jewellery, as “the most important row of cabochon emeralds” he has come across, while an exquisite diamond tiara attributed to Fabergé, gifted as a wedding present to the last Crown Princess of the German Empire, has a fascinating backstory involving one of Europe’s most influential dynasties.

This auction follows on from the record-breaking sale of the Royal Jewels from the Bourbon Parma Family in November 2018, which included jewels from Queen Marie Antoinette and set new benchmarks for period jewels with extraordinary provenance, a field pioneered by Sotheby’s.

The epitome of glamour, Hélène Beaumont (1894 – 1988) was a close friend of the Duchess of Windsor and famed for throwing legendary parties and galas during the hedonistic 1920s and 1930s. The socialite and philanthropist settled on the French Riviera and the lot presented by Sotheby’s was designed specifically for her. The emblematic necklace is set with 11 immaculate Colombian emeralds weighing a total of 50 carats and is estimated at CHF 2,895,000-3,980,000 ($3-4 million). These exceptional gemstones, perfectly matched both in colour and proportions, are combined with geometric diamonds in a breathtaking Art Deco design, placing this jewel among the very finest examples from the ‘golden age’ of Jewellery creation.

Although it is unsigned - as was not unusual at the time – its beauty and quality suggest that it was made by Van Cleef & Arpels, and in addition to being visually stunning, it is also ingeniously designed. The central elements of the necklace can be detached and transformed into emerald or diamond bracelets, and a separate section adorned with white diamonds can be substituted for the emerald section, to create a diamond necklace.

The second exciting lot, the diamond tiara with an estimate of CHF 200,000–300,000 ($200,000–300,000), was created around 1903 for Duchess Cecilie von Mecklenburg-Schwerin (1886-1954) who became the last Crown Princess of the German Empire. Cecilie was given the tiara by her Russian relatives on the occasion of her marriage to Crown Prince Wilhelm (1882-1951). The couple’s wedding, in June 1905, was the biggest social occasion of the century so far, with thousands of people flocking to Berlin for extravagant celebrations that lasted for four days.

The young couple was showered with gifts, including silver, porcelain and even a splendid carriage drawn by Hungarian grey mullions, presented by the Austrian Emperor, Franz Joseph I. Amongst the beautiful jewels bestowed on the newlyweds was the Fabergé tiara. The young duchess had joined one of the most important dynasties in Europe. Strikingly beautiful, with jet-black hair and impressive dark eyes, Cecilie quickly became one of the most beloved members of the German Imperial House and was particularly admired for her sense of style. Her elegance and fashion-consciousness meant that before long, her style was being copied by women across the Empire.

Daniela Mascetti, Chairman of Sotheby’s Jewellery Europe, says: “As we saw last November with Marie Antoinette’s pearl, historic jewels have the power to transport us back to a moment in time. The Fabergé tiara is another perfect example: its Kokoshnik design reflects Crown Princess Cecilie’s Russian family. From portraits we can see that she paired the tiara with her gowns in a very fashion-forward way for the very early 1900s. For so many collectors today – who seek out unique pieces with ‘soul’ - this jewel is really a masterpiece.”

Other highlights of the sale include an extraordinary 18.86 carat, emerald-cut diamond ring bearing the prestigious Harry Winston signature (with an estimate of CHF 800,000-1,200,000) and an Indian-inspired, Cartier jabot pin, set with oval rubies, diamonds and polished onyx. It was inspired by the traditional sarpech – an ornament worn in a man’s turban – and has an estimate of CHF 180,000-280,000. 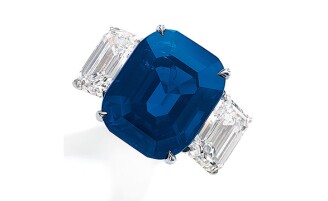