New York – Sotheby’s is privileged to present for auction a selection of ceramics and works of art collected in China during the late Qing period, to be sold in three sales across Asia Week: MING: Luminous Dawn of Empire, Important Chinese Art and Saturday at Sotheby’s: Asian Art.

The collection was formed by two of the most influential Germans living and working in Tianjin in the late 19th century: Gustav Detring (1842-1913) and his son-in-law Constantin von Hanneken (1854-1925). Individually both men operated at the highest levels of the Qing bureaucracy and played historically significant roles in the politics, diplomacy and military of the tumultuous late Qing period.

Born in the Northern Rhine-Westphalia, Gustav Detring moved to China in 1865 to join the Customs Service, working under Sir Robert Hart, Inspector General of the Imperial Maritime Customs Service. By 1872 Detring had risen to become a Customs Commissioner in Tianjin and, six years later was appointed to serve as the private and trusted advisor to Viceroy Li Hongzhang, a position he held for twenty seven years.

During his time in China, Detring rose to have one of the most senior positions in the Qing bureaucracy, including in the Zongli Yamen (Foreign Ministry) and as Commissioner for the Northern Ports. His achievements in China are nothing short of staggering. He negotiated a series of treaties and trade agreements on behalf of the Chinese government; was used by Li during various diplomatic missions in the 1870s-80s; and was relied upon to deal with German arms manufacturers and in hiring military experts. During the Sino-Japanese War, an Imperial edict ordered Detring ‘to proceed to Japan to effect a settlement’. In 1896, Detring was conferred as Dingdaihauling ‘Rank One’ by the Dowager Empress Cixi, making him the highest ranking Westerner in China, as memorialized by a painting at the Astor Hotel in Tianjin.

DETRING CONFERRED AS 'RANK ONE,' THE HIGHEST RANKING WESTERNER IN THE QING DYNASTY, BY THE EMPRESS DOWAGER AND LI HONGZHANG, 1896. THIS PAINTING IS DISPLAYED IN THE ASTOR HOTEL, TIANJIN.

Detring’s contributions to Tianjin — the city he made his home — were no less commendable: he founded Tianjin University, co-published the Chinese Times, constructed the Tianjin racecourse, paved the roads of the foreign settlement, and was instrumental in the construction of the City Hall, named ‘Gordon Hall’ after Charles ‘Chinese’ Gordon. At the time of his death in 1913, a Chinese newspaper wrote: “His Influence upon the permanent prosperity of [Tianjin] is incalculable. We can hardly find a stage of public life in our present society which has not been associated with the great and valuable contribution made by Detring.”

Born in Trier on the Rhine, and described by his family as a ‘patriot of China’, Constantin von Hanneken had served as a Captain in the Prussian Field Artillery before being hired as one of Detring’s military advisors. He moved to China in 1879 to take up the position and quickly established himself as a close friend and advisor to Li Hongzhang, whom he worked for until 1887. Li put von Hanneken in charge of reorganizing and modernizing the Chinese army and in designing and building several naval forts including, most significantly, Port Arthur (Lüshun gang). Von Hanneken was highly decorated for having established Port Arthur in 1881, eventually rising to the rank of Chinese general, and later tasked with the fortification of Talienwan and Weihaiwei.

During the Sino-Japanese war, in November 1894, the Guangxu emperor issued a decree making von Hanneken commander in chief of China’s armies with ‘ample funds and power’, in the hope that a Western general could defeat the Japanese army. Under pressure from xenophobic factions within the court, the plan was later reversed, eventually leading to the capturing of Port Arthur and Weihaiwei. Together Detring and von Hanneken also oversaw the vast British controlled Kaiping Mining Company, which was the first successful large-scale effort to introduce Western technology and methods into industrial production in China. Von Hanneken married Detring’s eldest daughter, Elsa, in 1895, thereby uniting these two prominent families.

(ABOVE) AN EXTREMELY LARGE AND RARE BLUE AND YELLOW 'NINE PEACH' CHARGER, CHUXIUGONG MARK, GUANGXU PERIOD. ESTIMATE $40,000 – 60,000. TO BE OFFERED IN IMPORTANT CHINESE ART AUCTION ( 21 MARCH 2018 ). (BELOW) THE CATALOGUE ENTRY FOR THE CHUXIUGONG ‘NINE PEACH’ CHARGER AT THE ‘AUSSTELLUNG CHINESISCHERKUNST’ EXHIBITION IN BERLIN, 1929.

Whilst Detring and von Hanneken’s professional endeavors in China are well documented, their collecting activities are less known. Collecting Chinese art appears to have been something for a hobby for both men — no doubt facilitated through their close working relationships with Li Hongzhang as well as their access to the Qing court, including to the Dowager Empress Cixi and to the Guangxu emperor. Certain works from the collection were likely personally gifted to them by the Qing court (such as the rock crystal seal belonging to the Dowager Empress Cixi), but collecting may well have also been a means of decorating their palatial Tianjin homes.

Furthermore, both men moved in the same professional and social circles in China as some of the most legendary Chinese art collectors of the time, including Alfred E. Hippisley (1848-1939), Commissioner of the Maritime Customs between 1876 and 1884, who formed one of the greatest collection of the Qing dynasty porcelain; Herbert Hoover (1874-1964), a mining engineer who worked at the Kaiping Mining operation, later becoming the 31st President of the United States, who collected Chinese blue and white porcelain; and von Hanneken’s brother-in-law Ernst Ohlmer (1847-1927), a maritime customs officer better known for providing one of the earliest photographic records of the remains of the Yuanmingyuan in 1872, and whose extensive collection of Chinese porcelain is today housed in the Roemer-Pelizaeus Museum in Hildesheim.

ROEMER MUSEUM LISTING FROM 1899, SHOWING ITEMS FROM THE VON HANNEKEN / DETRING COLLECTION, INCLUDING LOTS 549 AND 550 FROM IMPORTANT CHINESE ART.

Constantin von Hanneken returned briefly to Germany in 1895, bringing a large quantity of porcelain from his collection back with him for safekeeping. In 1899, approximately 160 pieces from his collection (including the Qianlong seal mark and period ‘dragon’ jar above) were loaned to the Roemer Museum in Hildesheim.

In 1919, the family left Tianjin for good, settling first in Hannover but, against the backdrop of the post-war economic depression in Germany, some of the family emigrated to the United States in the 1920s and 1930s. Parts of the collection remained in Germany through the first half of the 20th century, and a small number of works (including the large Chuxiugong charger above) were lent to the groundbreaking ‘Ausstellung Chinesischer Kunst’ exhibition in Berlin in 1929, before also making their journey to America in the 1950s where they have remained with Detring and von Hanneken’s descendants to this day. 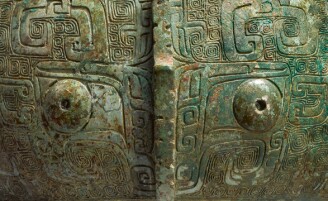 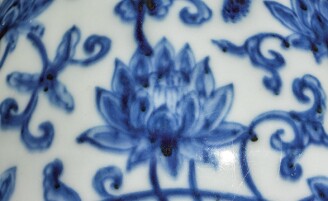