F rom 20 July–21 September Sotheby’s S|2 Gallery will host an exhibition by Tsuyoshi Maekawa, perhaps best known for his intricate layered burlap works, and for his association with the Gutai art group. Bianca Chu, Deputy Director of S|2, spoke to him to discover more.

Bianca Chu: You were a member of the Gutai art group from 1962-1972. What was your experience in the period immediately after the dissolution of the Gutai group? Following this, did you feel a conscious break or change in the work you were making?

Tsuyoshi Maekawa: My relationship with Gutai was essentially my relationship with Jiro Yoshihara. When Yoshihara died, it meant that I had to start making my work entirely on my own. I did my best not to dwell on the past and discover a new direction, and began consciously changing my work in a dramatic way.

BC: Did the members of the group continue to keep in touch, collaborate and influence each other’s work after the dissolution of the Gutai group?

TM: I didn’t have that much contact with the others after Gutai’s dissolution, but I did continue to show my work in the Ashiya City Exhibition, and since a lot of the former members also participated as judges, we would see each other every year at that time. Also, as a kind of recreational activity, I would go on monthly trips to various shrines and temples with Kazuo Shiraga, Sadaharu Horio, Joji Kikunami, and Yutaka Matsuda. Shiraga would go and examine each of the temples and famous historical spots beforehand, and provide us with lectures on them when we went. We would also have barbecues next to the river or some other place near our destination. I also took part in the Box exhibition that Horio organised.

BC: In the 1970s, you began to experiment with other materials beyond burlap, such as cotton and hemp, and also refined your different sewing techniques. Who taught you to sew and why is this hand-made quality of work important?

TM: I began using sewing techniques because I thought I could make more detailed works than the pleated burlap pieces I had made when I was in Gutai. It also seemed like I could make things faster that way. When I began using a sewing machine, it was much more effective than I had imagined – or rather I discovered and developed completely different effects. And when I showed these works in an open-call exhibition, they were warmly received, and that was one of the reasons I decided to keep on making them. The sewing machine was something we had in my house when I was a child, and I had layered several pieces of cloth on top of each other and used it to make a baseball glove. That was what inspired me to use the machine. I was quite good with my hands from the time I was small.

For approximately 30 years, I have made works in which I create a foundation by applying many layers of gesso and white paint to the fabric, which retains the form of the sewn lines, and spraying acrylic paint on it with an air compressor.

BC: How did your use of colour and paint change and evolve over time?

TM: I used lots of different things to create effects that had never existed in the past. I also used various solvents and incorporated other interesting things, but it gradually became monotonous.

BC: When did the use of a spray method for applying paint begin? And how did you discover this method?

TM: I had been using spraying in my work as a graphic designer, so I decided to introduce that effect in my art. In my design work, I started using spraying around 1970, and the first time I used it in my art was in a work I showed at the Ashiya River Biennale [Hyogo Prefecture] in 1974.

BC: Your work has included large sculptural installations as well. Do you see a difference between painting and sculpture in your practice?

TM: I don’t particularly think about the differences between paintings and sculptures. Later, I sometimes wonder if something is a sculpture, but I don’t think very deeply about it. I think of two and three-dimensional things as being the same.

BC: Your work seems to have shifted more towards an exploration of calmness and refinement of line and colour in the 70s, and less ‘action-based’. How important is the concept of order versus chance in your creative process?

TM: I don’t think about order and chance in a logical kind of way. I think what’s important to me is whether or not something suits my personal sensibility. Basically, I set out to make something original.

BC: In your recent work, you return to the use of raw burlap, only now experimenting with a burlap that has been ‘found’ or ‘readymade’ for other uses. What inspired you to return to this original material? Maybe you can also describe a bit more this new body of work.

TM: I guess I like burlap because I’m physically accustomed to it. I tried making things with many different materials, but I had the sense that there were still any number of things that I hadn’t done and that were possible with burlap, so I made lots of massive 230x180cm works for my solo shows in 1999 and 2002.

After that, there still seemed to be more possibilities for burlap, so I have continued to use it in my work. Your question reminds me how much depth the material has and I think it’s going to inspire me to make something new. Recently, I’ve been making things with different appearances by doing something very simple or making a small change. When I spread out a piece of burlap, I gaze at the texture and colour for a while. Sometimes I have a flash of inspiration for a new work as I’m doing this.

I was attracted by the strength of burlap, and I thought that the texture of a well-used piece of fabric would enliven the work. Changes created by processing or painting the material also seemed interesting and using something that was familiar to me also seemed like a plus. At the time, it wasn’t easy to get hold of new burlap, so I used second-hand bags and I didn’t pay much attention to the fact that there were brand names printed on them. I was also interested in how the time imbued in the fabric seemed to seep out in the works and fill me with more power. That in itself was fine, but I also believe that the quality of a work is never dependent on the material. I was deeply impressed by Jiro Yoshihara’s way of intuitively judging a work as good or bad. Even with a new fabric, I’m confident that I can draw out more strength, so now I use both old and new materials. 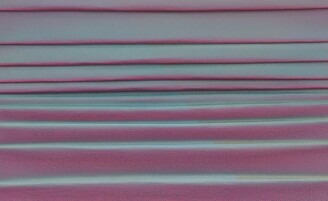