Tour the Must-See Mario Buatta Exhibition, a Scrapbook of His Life

I n 2019 Sotheby’s transformed its York Avenue galleries into a contemporary, expansive, museum-like space worthy of the myriad fine art and luxury objects it offers each season. In 2020 the galleries have transformed yet again, but this time into the exceedingly charming abode of the late interior designer, Mario Buatta. Thanks to the design genius of Rush Jenkins, whose former exhibition work for Sotheby’s includes the famed 2014 Bunny Mellon sale, a bevy of Buatta treasures have a fitting temporary home at Sotheby’s New York, where guests can view more than 900 items from the Mario Buatta: Prince of Interiors auction on 23 January.

“Mario created emotion. He created a response, whether it was with his interiors or his jokes. That comes through loud and clear in his collecting,” Jenkins told Sotheby’s on the process of designing an exhibition on par with Buatta’s larger-than-life persona. The two first met eighteen years ago when Jenkins was working on a Sotheby’s sale called By Design, which featured property from illustrious interior designers, such as Bunny Williams, Axel Vervoordt, Ann Getty and Buatta. Sotheby’s also served as the source of another important Buatta-adjacent connection, that between Jenkins and Emily Evans Eerdmans, who met during their graduate studies at Sotheby’s in London. A design expert, historian and author, Eerdmans not only wrote Mario Buatta: Fifty Years of American Interior Decoration but also played an integral role in Sotheby’s upcoming Buatta auction.

Confident Jenkins (who runs Jackson Hole-based company WRJ Interior Design with Klaus Baer) was the man for the job, Eerdmans tapped him to resurrect the late designer’s home at Sotheby’s. While Jenkins made painstaking efforts to recreate the essence of Buatta’s interiors with large printed scrims, blown-up photographs, nearly exact paint matches and architectural details, he also cleverly composed imagined vignettes using hundreds of unseen items Buatta had in storage.

“Design is like theater; you’ve got to create some wonder, some intrigue and a little bit of drama,” explains Jenkins, who is guided by the Japanese philosophy of “half hidden, half seen.” “You don’t know what’s around the corner, but you’re getting a slight glimpse,” he says of building an enticing exhibition narrative. “You don’t pick up a novel and go straight to the ending; you have to work chapter by chapter. A great book unfolds page by page. A really good home or exhibition unfolds in the same way, object by object.” Ahead, discover more about Buatta’s singular collection as Jenkins walks us through the exhibition’s key areas.

“There were three important aspects of Mario Buatta that we wanted to showcase to set the tone for the exhibition: his lifestyle, sense of humor and passion for collecting. We begin just as one would enter a home. This mirror (lot 94) hung above his mantle, which is the hearth of the home, so we wanted to bring that to the forefront. Everyone remembers Mario’s canes, so we placed them in an umbrella stand (lot 5), which you’d typically find at a home’s entrance. Of course, Mario was known for chintz, so we added a chair upholstered in beautiful floral chintz fabric (lot 534) with a little charming bear (lot 933) to represent his humor. I’m very fond of black and white photographs, and I think this is a beautiful, romantic, Hollywood-esque photo of Mario. It was important for me to have a quote from him, rather than about him. I love that this one has several meanings. A house isn’t born overnight; it grows over a period of time like a garden. Likewise, Mario’s success wasn’t born immediately.”

“This exquisite chinoiserie piece (lot 555) is one of the most important lots in the sale. We placed this at the exhibition entrance because it immediately shows Mario’s taste level. I also love how it complements the black and white photo.”

“How do you design Sotheby's contemporary galleries to feel like a home? We matched the shade of paint as closely as possible to the one Mario had in his dining room. We also incorporated crown moldings to capture the essence of his very ornate ones. This room is the only one in Sotheby’s exhibition to have a chair rail, just like his dining room had.”

“I chose this room to feature the most important wall because of its symmetry. If you take a photo of this room from directly head on, you don’t know where the images and the objects start. It’s like a play with trompe-l'œil set design. We wanted it to feel like you were standing in Mario’s living room.”

“Throughout the exhibition we elevated objects of importance on plinths. Here, we put fabric behind the drapes (lot 159), versus leaving the walls plain yellow, in order to resemble real windows.”

“Mario had two screens (lot 172) that happened to be the exact height and width as the niches that already existed at Sotheby’s. This penwork piece (lot 304) is one of my favorites. The lanterns (lot 650) are very whimsical. The screen’s branches have movement that emphasizes the movement within the lanterns’ pagoda tops, the cabinet's penwork and the chair's scrolling pattern (lot 662)."

“One thing that came through loud and clear as we were putting together the exhibit is Mario’s appreciation for chinoiserie. Many of the items here are connected by color or gilding, which helps objects speak to one another even if they are from different time periods. Mario also said that every room should have something black and something red.”

“I love the Maharajah feel of these bedrooms. Mario's bed (lot 636) was one of his very favorite items. Surrounding it are several books, some which belonged to Nancy Lancaster.”

“Here, I wanted to have a breath of fresh air. This is about Nancy Lancaster as an influence on Mario, and I felt I could better highlight the items if I give them a cleaner palette. There’s no color on the walls, so you can see the forms in more of a museum setting, rather than a lifestyle one.”

“Mario bought this Sister Parish rug (lot 352) for $100,000, but he kept it rolled up in his apartment for 35 years. It’s curious to me that he never sold or got rid of anything. I think it must have been an emotional connection.”

“This was another part of the exhibition where we wanted to show Mario’s humor. We placed a painting of a monkey (lot 416) next to a photograph where Mario is squatting on a table in his design studio with all these fabrics behind him. Over his shoulder there’s a sculpture of a dog coming out of a doghouse, and we put the actual object beside the photograph.” 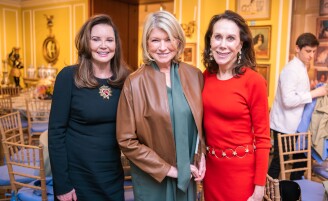