Three of a Kind: Fashion Photographs by Norman Parkinson

A rguably the most quintessential British photographer who ever lived, Norman Parkinson revolutionised fashion photography through his own personal style, peppered with charm and eccentricity. He established his studio in 1934 and following World War II he quickly became one of Harper’s Bazaar and Vogue’s most important photographers.

Heavily influenced by Hungarian photographer Martin Munkacsi whose freewheeling style captured the speed and movement of the 1930s, Parkinson took this a step further by leaving the formal studio behind. He ventured with the models into the real world, including the city and exotic locations, in order to search for this dynamism.

A young Audrey Hepburn posing in Italy in 1955, captured by British fashion photographer Norman Parkinson for Vogue, a couple of years after winning her first Oscar for The Roman Holiday movie. The actress is wearing her favourite designer, Givenchy, who will later design the iconic little black dress in Breakfast at Tiffany’s.

This stunning vintage print shows Parkinson’s talent and dexterity in capturing a moment. Everything in this image is perfectly placed and lit, from the slice of lemon in the teacup, to the range of tones in the different pieces of silver, including a self-portrait in the photographer in the middle teapot. All the elements in this photograph describe Parkinson’s talent and reputation as one of Britain’s most successful fashion photographers.

This stunning Parkinson vintage print features two models wearing organdie dresses by Jacques Fath. The latter was a French fashion designer who was considered one of the three dominant influences on postwar haute couture, the others being Christian Dior and Pierre Balmain. Much like Parkinson’s approach to photography, where the models were portrayed in dynamic and vital poses rather than as static mannequins, Fath’s designs were tailored for the modern woman. The New York Times described it as "conceived for the benefit of women forced to ride bicycles during gasoline rationing". 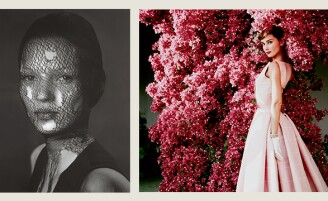