G iorgio Morandi is most known for his repeated paintings of the same selection of familiar items, including bottles, bowls, pots and boxes. In his works, they lose their domestic purpose, to become sculptural objects that invite meditation and contemplation. Through repeated scrutiny of these simple items, Morandi achieved a sense of eternal timelessness.

Natura morta from 1943 accommodates a poetic encounter with ordinary objects that measure spatial depth and animate the scene with their chromatic personalities ranging from cream white to beige. This work encompasses much of Morandi’s pictorial essence and belong to a mature period of production whereby the colours tend towards warmer tonalities and the presence of light becomes more palpable.

Executed two years later, Natura morta dated 1945, once part of Roberto Longhi's private collection, testifies to the friendship between Giorgio Morandi and the great art historian. The fortuitous encounter between the two was absolutely essential to the worldwide success of Giorgio Morandi and formed the basis of their future fruitful collaboration. Together, the painter and the art historian, with their similar cultural experiences, founded a school of thought, a ‘culture’ in the true sense of the term, which looked to the past and to local pictorial tradition, respecting its use of colour, in contrast to the avant-garde artists of the first half of the 20th Century.

Already in the 1950s, the Bolognese artist was able to achieve enormous success in the United States, thanks to exhibitions in major museums, like the Museum of Modern Art in New York, at an exhibition organised by Barr and Soby, as well as in articles published by magazines like Art News. Unable to relate to the artistic context of that period, he deliberately decided to distance himself from the problems faced by his contemporaries, who felt the need to renew themselves. Morandi wanted to remain faithful to himself, to repeat himself obsessively, to study and deepen each of his subjects in the smallest details and in the widest possible range of nuances.

The third Natura Morta included in the sale is part of a ten-painting series realised in 1957, in which the artist proceeds by moving the objects from one floor to another, as can be seen in the canvas in the Vatican Museums, moving them forwards or backwards on along the same horizontal line. In addition to the organisation of the objects in the canvas, we notice the levels upon which the painter divides up the physical space of the painting, namely the table’s surface, the grey void under it and the beige wall.

This representation thus allows for a vision of three spaces, creating an exception to the painter’s usual still life works, in which there are two visible planes, namely the supporting surface and the wall behind it.

Giulio Carlo Argan once stated that “if [Morandi] always painted the same bottles, the same jars, the same corner of town, his whole life, it is certainly not because he loved those objects, but because, as is well known, he needed for the object not to cause problems and not to recall and localise on itself the interest of knowledge”. ('Morandi e la cultura artistica del secondo dopoguerra', in Morandi Ultimo. Nature Morte 1950-1964, Milano 1997). Thanks to Giorgio Morandi, Italy can boast one of the greatest 20th-century artists, a veritable Master who, calmly and discreetly, was able to look at the depth of things, stripping them of their exterior and frivolities and returning them in their eternal truth. 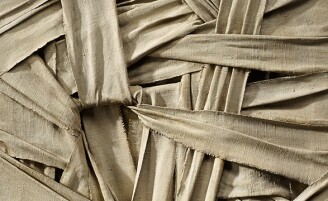