By Sotheby's
Italian artists who transformed their artworks into jewelry feature in the Milan Jewels Online sale.

O ne of the most powerful ways to transform one’s look or capture one’s expression of style is through jewelry. From simple jewels such as stud earrings to an extravagant diamond necklace, every jewel tells its own story. In the last century, many famous artists from the Bauhaus, Surrealist and Cubist movements began experimenting with their art in 3D; thus, the idea of ‘wearable art’ was conceived, creating an outlet from the conventions of traditional jewelry allowing these artists to create unique designs, often with sculptural qualities.

Cèsar, an artist with no training as a jeweller, translated his famous Compression sculpture into a wearable jewel. Using his friend Diane Venet’s unworn jewels, he compressed the pieces into a singular brooch, giving old and forgotten pieces a new life.

Pablo Picasso experimented within the jewelry world using the most unexpected materials, such as pebbles he collected on the beach, which he then created into an amulet in 1936 for photographer, Dora Maar. Sculptor Giacometti also created prototypes of jewels, which he designed for his friend Elsa Schiapparelli, depicting a mermaid motif, which then transformed into brooches for his friends.

Breaking from the traditional rules of creating conventional jewelry, sculptor Arnaldo Pomodoro created several pieces of wearable sculpture. A pair of cufflinks, a gold ring and a brooch each embody a strong identity reflective of Pomodoro’s personality and aesthetic in a wearable form.

The artist Consagra, both a sculptor and jeweller wrote “a jewel is a charge of emotion, ecstasy in the pleasure of what he holds in his hand, in the allusive forms that he makes explicit.”

Facchini’s gold and enamel brooch represents the explosion of dynamic energy, while Sebastiano Balbo’s Meccaniche necklace is an expression of sculpture and architecture.

Artists' jewels are not only decorative but express the character of the wearer and artist in the most unique and individual way. 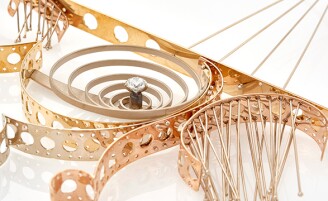