J acqueline Kennedy’s fondness for Indian art comes under the spotlight once again as a painting previously owned by the former First Lady features in the upcoming Khosrovani-Diba Collection sale.

Study of a Stork, signed by Shaykh Zayn al-Din and dated 1781, is one of two birds from the Lady Impey Series to have been part of Jacqueline Kennedy's estate when it was sold by Sotheby’s in 1996.

Writing about that sale, the journalist Suzy Menkes noted in a New York Times article: “…What a taste for the exotic! The woman who insisted on seeing the Taj Mahal by moonlight and riding an elephant with her sister, Lee Radziwill, on a trip to Pakistan was drawn to miniatures of Mogul gardens.”

Likened to Durga, the Goddess of Power, during her trip to India in 1962, Jacqueline Kennedy’s interest in the artwork of the Subcontinent may have been fuelled by her friendship with the renowned American academic, curator, teacher and collector, Stuart Cary Welch, whose legacy in the field of Indian and Middle Eastern Art reached beyond his positions as lecturer at Harvard University and Curator at Harvard Art Museums (and whose collection of Islamic and Indian art was sold at Sotheby’s in 2011).

Study of a Stork was first exhibited in London in the 1980s – but the story started several centuries earlier in a garden in India.

Sir Elijah Impey (1732-1809), his wife, Lady Impey, and their family moved to Calcutta in 1774 following his appointment as Chief Justice in Bengal under the East India Company. As their exotic menagerie of pets grew, so did Lady Impey’s interest in the natural history of the region.

She employed three known artists from Patna, Shaykh Zayn al-Din, Bhawani Das and Ram Das, all trained in the Mughal tradition, to record their animals and birds on a true-to-life scale. The project, which lasted over six years, resulted in over 300 illustrations, including 197 recorded drawings of birds, 76 fish, 8 flowers, 28 reptiles and 17 beasts which were sold at Philips on New Bond Street in 1810 after the death of Sir Elijah.

Amongst the finest group of natural history illustrations commissioned by the British in India (a style known as ‘Company School’), this particular work was painted by Zayn al-Din in 1781 and features a stork, native of Cambodia, Malaya, Java and Sumatra, eating a snail in a slightly smaller than life-size scale.

The Stork was exhibited in 1984 on 14 Old Bond Street by Michael Goedhuis and Mallett and Son before being acquired by the former First Lady.

The Khosrovani-Diba Collection sale is in London on 19 October 2016. 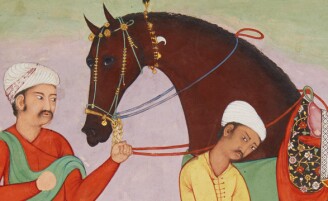