The Most Valuable Tibetan Thangka Painting Sold at Auction

S otheby’s ongoing Asia Week sale series in New York has already seen history be made. The Indian, Himalayan & Southeast Asian Art on 21 March achieved $5.2 million, led by an extremely rare and beautiful thangka. One of the finest of all mandala paintings from 14th-century Tibet, Thangka Depicting a Hevajra Mandala achieved $2.4 million, twice its high estimate. Watch the video below for an in-depth look at this record-breaking thangka.

Explore the Ancient Map to a God’s Celestial Palace

On offer from the estate of Johannes Dutt, the work is numbered 26th in a series of which at least 18 other paintings are known. The group represents perhaps the finest of all mandala painting from Tibet in the 14th century, designed and painted with the same exquisite attention to detail and vibrant palette. While the overall format and dimension of the paintings remain the same throughout the series, the shape and size of the inner palace expands or contracts depending on the iconographic complexity of each focal deity and the extent of their retinue. The Hevajra mandala’s composition fills the inner ground of the mandala palace leaving little empty space in one of the most dynamic and aesthetically pleasing of all the paintings in the set. 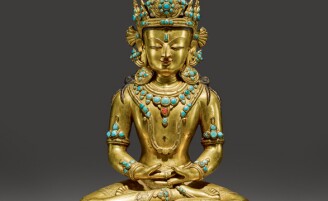 Paintings from this series were first published – and recognized as masterpieces of early Tibetan art – by Robert Burawoy, in his seminal exhibition catalogue Peintures du monastère de Nor from 1978 which featured four of the mandalas. Paintings from the set are now preserved in private and museum collections worldwide. The presentation of this mandala in Sotheby's recent sale was a re-discovery of sorts. It's existence was unknown since it entered the Johannes Dutt collection in 1973. The record price realized for the Hevajra mandala is yet another achievement in the illustrious history of the Indian department at Sotheby's, which has presented masterpieces and discoveries season after season in our 35 years of South Asian art sales in New York.