A Dramatic Scene from a Sacred Hindu Text

The present work depicts the dramatic scene in Book Ten of the Bhagavata Purana when the evil King Kamsa of Mathura attempts to kill his sister (or cousin) Devaki during her wedding procession. Having married Vasudeva, a noble of the Yadava clan, Devaki is on her way to her husband’s home, seated with Vasudeva in a canopied carriage and accompanied by Kamsa and a vast retinue that stretches across the rolling landscape. At this point the evil king Kamsa hears a voice prophesying that he will be killed by the eighth son of Devaki. Enraged by this premonition, he leaps towards Devaki, draws a sword, grabs her by the hair and tries to kill her, as she clings to Vasudeva.

“…one of the greatest achievements of painting at Kangra…. remarkable for its effortless naturalism and for its deft and vivid rendering of figures in action.”

The shocked Vasudeva stretches his hand towards Kamsa, beseeching him to refrain from killing Devaki and promising to hand over all their future sons if Kamsa will spare his bride. In later episodes Kamsa imprisons Vasudeva and Devaki and kills her first six sons. The seventh, Balarama, is magically conveyed via the womb of another wife of Vasudeva. The eighth son, Krishna, an avatar of Vishnu, is swapped at birth with the baby daughter of Yasoda and Nanda, who live far away in the forest of Vrindavan. The Bhagavata Purana then follows the adventures of Krishna in childhood, youth and adulthood, when he returns and kills the evil Kamsa.

In this painting, the violent moment of action is set against the calm and the stately progress of the royal wedding procession as it moves across the green hills. Kamsa’s sudden murderous act and the frightened reaction of Devaki attracts the attention many of the accompanying entourage, and there is plenty of alarm and shock, with officers and maidservants turning suddenly to look at the evil king or throwing their hands up in consternation at the danger to Devaki. And yet the cows, elephants and horses, as well as most of the attendants continue to march sedately across the landscape. The contrast achieves a composition that is both lyrical and dramatic. 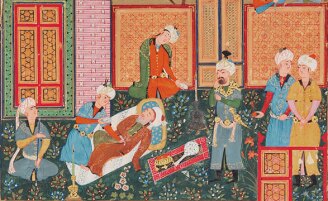