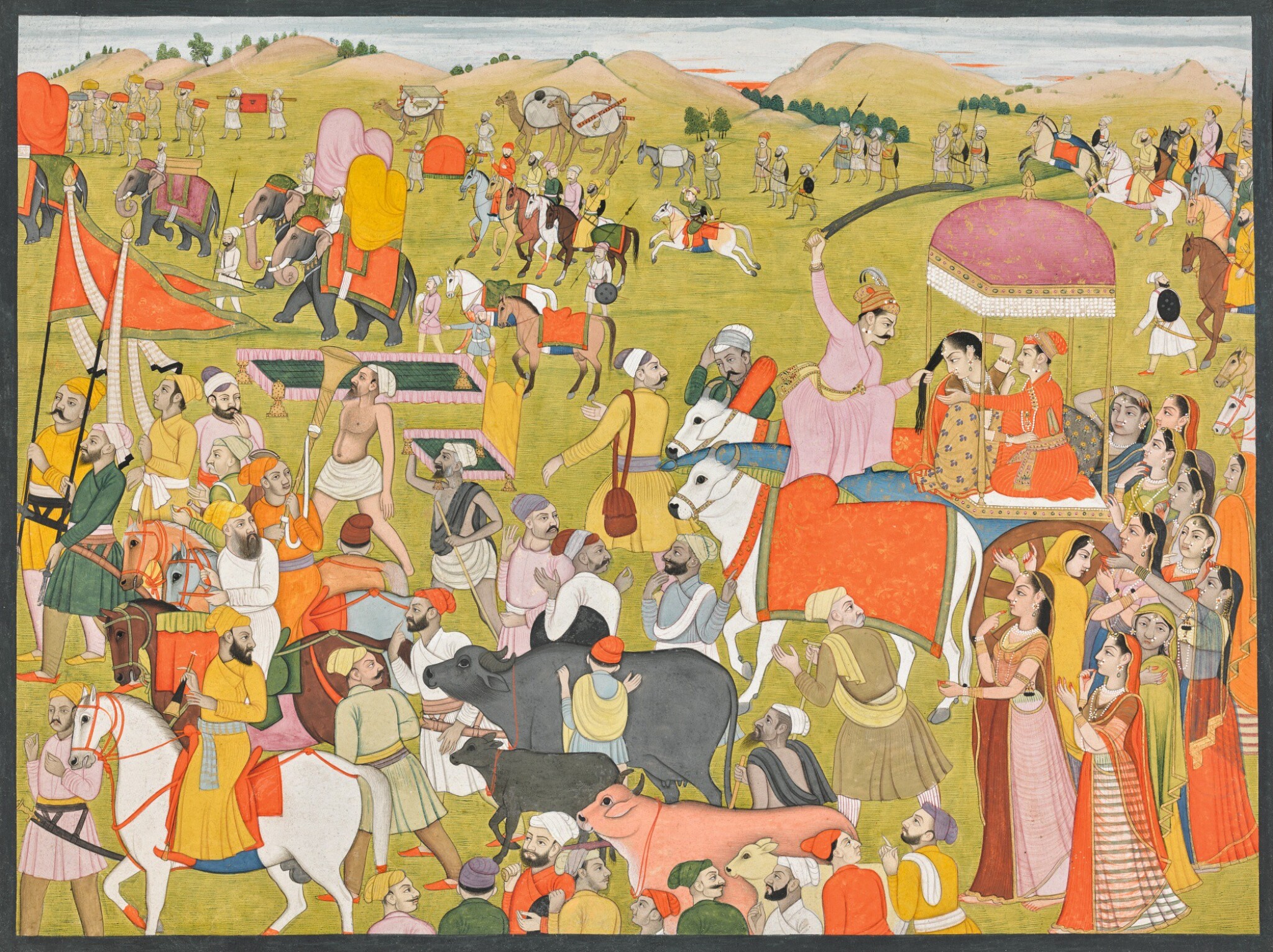 In very good overall condition, very minor losses to three of the central figures with associated retouching, slight retouching to some of the faces to the lower border and to the beige cow, very fine vertical crease lines to the upper left hand corner and diagonal crease to the lower left hand corner, colours vivid and gold strong; the reverse with minor rubbing along the edges and collage paper repairs; the edges of the external border with some wear, as viewed.

The Sublime Image, Indian and Persian Miniatures, Spink, London, 1997, no.14.

This dynamic painting is from the well-known Bhagavata Purana series of circa 1780 known as the 'Kangra' Bhagavata Purana series, the 'Modi' Bhagavata Purana, or the 'Small Guler' Bhagavata Purana series. W.G. Archer described this series as “one of the greatest achievements of painting at Kangra….. remarkable for its effortless naturalism and for its deft and vivid rendering of figures in action” (Archer 1973, vol.I, p.294). It has long been associated with artists of the first generation after Nainsukh and Manaku, the greatest family of Pahari painters of the second half of the eighteenth century, and is revered as one of the most supremely accomplished sets of Pahari paintings. Works from this series are extremely rare in Western collections; the last painting to be offered at public auction was at Sotheby's in 1992.

The present work depicts the dramatic scene in Book Ten of the Bhagavata Purana when the evil King Kamsa of Mathura attempts to kill his sister (or cousin) Devaki during her wedding procession. Having married Vasudeva, a noble of the Yadava clan, Devaki is on her way to her husband’s home, seated with Vasudeva in a canopied carriage and accompanied by Kamsa and a vast retinue that stretches across the rolling landscape. At this point the evil king Kamsa hears a voice prophesying that he will be killed by the eighth son of Devaki. Enraged by this premonition, he leaps towards Devaki, draws a sword, grabs her by the hair and tries to kill her, as she clings to Vasudeva. The shocked Vasudeva stretches his hand towards Kamsa, beseeching him to refrain from killing Devaki and promising to hand over all their future sons if Kamsa will spare his bride. In later episodes Kamsa imprisons Vasudeva and Devaki and kills her first six sons, but the seventh, Balarama, is magically conveyed via the womb of another wife of Vasudeva, while the eighth son, Krishna, an avatar of Vishnu, is swapped at birth with the baby daughter of Yasoda and Nanda, who live far away in the forest of Vrindavan. The Bhagavata Purana then follows the adventures of Krishna in childhood, youth and adulthood, when he returns and kills the evil Kamsa.

In this painting, the violent moment of action is set against the calm and the stately progress of the royal wedding procession as it moves across the green hills. Kamsa’s sudden murderous act and the frightened reaction of Devaki attracts the attention many of the accompanying entourage, and there is plenty of alarm and shock, with officers and maidservants turning suddenly to look at the evil king or throwing their hands up in consternation at the danger to Devaki. And yet the cows, elephants and horses, as well as the majority of the attendants continue to march sedately across the landscape. The contrast achieves a composition that is both lyrical and dramatic.

A drawing with the identical scene and of identical dimensions, and surely the preparatory sketch for the present painting, is in the Chazen Museum of Art, University of Wisconsin (formerly the Elvehjem Museum of Art, see fig.1). See also P. Chandra, Indian Miniature Painting, The Collection of Earnest C. Watson and Jane Werner Watson, Madison, 1971, no.236, pp.138-9).

For the text in the Bhagavata Purana that relates to this scene, please see the onlien version of the catalogue:

“It was in that place (Mathura) that one day the divine character of Vasudeva, after having married Devaki, together with his bride mounted a chariot to return home. Kamsa, the son of Ugrasena held the reins of the horses in the midst of thousands of golden chariots. When she left home king Devaka, who was fond of his daughter, had given a dowry of four hundred elephants with golden garlands, ten thousand horses together with eighteen hundred chariots and a hundred young and attractive maidservants complete with jewelry. My dearest King, when they departed conch shells, bugles, drums and kettledrums vibrated in concert to wish the bride and bridegroom all the best. On the way, a voice from beyond addressed Kamsa who held the reins: 'The eighth child of this girl you are carrying with you, oh fool, will put an end to your life!' Thus being addressed he, who mischievous and sinful in the past had degraded the Bhoja family, took up a sword against his sister and grabbed her by her hair with the intention to kill her. In order to pacify him who was ready to commit such a heinous and shameless crime, Vasudeva, that greatly fortunate soul, addressed him. Sri Vasudeva said: 'A man of so many praiseworthy qualities, such a brilliant star among the heroic Bhojas like you, how can you kill your own sister, a woman, especially at the time of her marriage….. This innocent woman, your younger sister, completely depends on you like she was your own daughter - do not kill her. She means good to you and she deserves your care and compassion!' Seeing his determination Vasudeva thought deeply about how he, with this immediate threat of death, could hold him back and thus he came up with the following alternative. [He thought:] 'An intelligent person should, as long as he is in control of his mental and physical faculties, ward off death, but when someone is faced with the inevitability of death, this rule does not apply. If I promise to deliver my sons to this man of doom, I might set my innocent Devaki free. Perhaps I don't get any sons or maybe he will die beforehand. That might happen or the contrary. Who knows what fate has in store for us? …. After contemplating this way to the best of his ability, the God-fearing man paid the sinner his obeisances and submitted the proposal to him with the greatest attention. With a big lotus-like smile on his face but with anxiety and sorrow in his heart he then spoke to the cruel hearted, shameless man. Sri Vasudeva said: 'You have, according to what the voice from heaven vibrated, nothing to fear from Devaki indeed. Her sons gave rise to your anxiety and I'll deliver them therefore all to you.' Kamsa understanding the essence of what he said was for the time being stopped from killing his sister. With him more at ease, Vasudeva then was happy to come home [unharmed]. (Srimad Bhagavatam, Canto 10, vv. 28-55, online version, 3rd revised version 2012, abbreviated)