O ver the course of centuries of Tantric Buddhist practice in Tibet, the importance of the Lama, or teacher, remains central to the spiritual development of the student. Not only are these Masters considered to hold enlightened aspects of specific deities, but they are also meant to be the source of transmission of teachings from each lineage holder of the past. Lineages in Tibetan Buddhism are sacred families, the descendants linked through the direct passing down of the Dharma, or teachings which commenced with the Buddha Shakyamuni. Like the Buddha whose story unfolded from his Princehood in India to his Enlightenment and his expositions on the Dharma, each spiritual Master’s life – including both obstacles and achievements on their spiritual path – are meant to provide inspiration and guidelines as practitioners tread their own path towards enlightenment.

All the lineages in Vajrayana Buddhism commence with the 8th Century Master Padmasambhava, the Great Guru, whose legend tells of his miraculous birth from a lotus flower in the lake Dhanakosha. From his teachings, four main sects or lineages of Tantric Buddhism developed including the Shakya school, the Gelug school, the Nyingma school and the Karma Kagyu school. Portraits of the great teachers from these schools abound in both thangkas and cast sculptures, their images showing divine attributes and features melded with their personal traits and characteristics. Our upcoming sale includes several portraits of these great teachers both in thangkas and in sculpture, from the Karma Kagyu school, the Geluk school and the Sakya school.

This thangka depicts the 7th Karmapa who wears the black crown, the principal feature of the Karma Kagyu sect. He was recognized as the 7th lineage holder at only nine months and spent much of his life in retreat and writing scholarly texts. Although they never met, in the lower right corner, the 8th Karmapa, Mikyo Dorje is featured here receiving teachings from his predecessor.
VIEW LOT

This silver cast sculpture features The Fifth Sharmapa, Konchak Yanglak (1525 - 1583), the “Holder of the Red Hat”, whose lineage is a branch of the Karma Kagyu sect, and hence explains the identical styling of crowns between the two lineages. The Fifth Sharmapa was formally enthroned by the Eighth Karmapa, Mikyo Dorje (1507–1554) who is featured in this thangka. Konchok Yanglak's portrait is recognizable from his slender physique, his elongated oval shaped face and enlarged ears. Here, cast in silver, a rare choice for Tibetan portraits, the Sharmapa is shown in meditation seated on a wide cushion with his left hand cradling a flaming jewel.
VIEW LOT

Atisha (982-1055?), the great Indian saint and scholar is depicted in this thangka. While Atisha is closely associated to the Gelug sect as his writings became the foundation for that school, his reputation is more often associated with reviving Buddhism in Tibet. In this image, Atisha wears flowing robes embellished with Chinese style phoenixes and is flanked by his identifying implements of the pitaka, or basket, and the kadampa stupa.
VIEW LOT

Rolpai Dorje, featured here, is associated with the Mongolian Geluk lineage. Educated at the imperial court of the Yongzheng Emperor (1723-1735), Rolpai Dorje formed a strong relationship with his fellow student, the future Qianlong Emperor (1736-1796). Here, the hierarch wears the mitre-shaped hat affiliated with the Changkya Hutuku lamas and bears his distinctive mark of a small growth on the right side of his face.
VIEW LOT 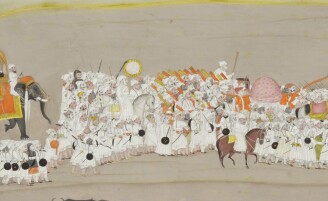