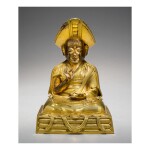 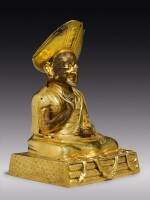 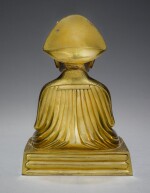 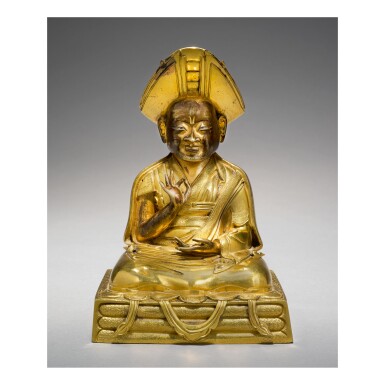 the Changkya Hutuku seated on a brocaded cushion embellished with a sash, with right hand in vitarka mudra, wearing robes incised with a lotus pattern and the distinctive hat associated with the Geluk hierarchs, the right side of the face showing the distinctive congenital bump of the master

The Changkya Hutuktu is associated with the Mongolian Geluk lineage, the primary seat located in Chamgkya in Kham in Eastern Tibet. Rolpai Dorje was recognized as the reincarnation of Ngawang Losang Choden (1642-1714), the previous Changkya Hutuktu and spiritual adviser to the Kangxi Emperor (1662-1722). Educated at the imperial court of the Yongzheng Emperor (1723-1735), Rolpai Dorje formed a strong relationship with his fellow student, the future Qianlong Emperor (1736-1796).

Rolpai Dorje was highly accomplished – he acted as political adviser to the Emperor, strengthening relations between Tibet, China, and Mongolia; he was a well-known scholar and translator, completing translations of the Tripitaka into Mongolian, Chinese and Manchu; he was involved in the building projects of monasteries and temples; and he managed the Imperial Palace collection of Buddhist art.

Here, the hierarch wears the mitre-shaped hat affiliated with the Changkya Hutuku lamas and bears his distinctive mark of a small growth on the right side of his face. Other examples of Rolpai Dorje in bronze can be seen in The Jacques Marchais Museum of Tibetan Art (Cat. 85.04.0162) and in the Field Museum of Natural History. A larger example is published in Donald Dinwiddie, ed., Portraits of the Masters, 2003, pp. 328-9, cat. no. 94.