T he Sotheby's Prize is an annual award of up to $250,000 to support and encourage museums to break new ground. The grant aims to recognize curatorial excellence, and to facilitate exhibitions that explore overlooked or under-represented areas of art history.

Congratulations to the Academy Museum of Motion Pictures, winner of the 2018 Sotheby’s Prize. To read more about this exhibition, and the five that were commended, click here. Thank you to everyone who submitted an application this year. Entries for the 2019 Sotheby’s Prize will open in March 2019. 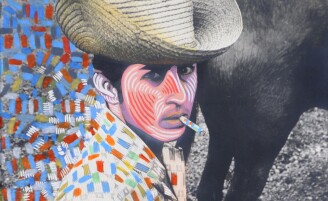 Connie Butler is the Chief Curator at the Hammer Museum, Los Angeles, where she has organized numerous exhibitions including Made in LA (2014); Mark Bradford: Scorched Earth (2015) and Marisa Merz: The Sky Is a Great Space (2017). Previously Ms Butler was The Robert Lehman Foundation Chief Curator of Drawings at The Museum of Modern Art (2006-2013), where she co-curated the first major Lygia Clark retrospective in North America as well as the survey Greater New York (2010) at MoMA PS1. She also co-organized the exhibitions Alina Szapocznikow: Sculpture Undone 1955-1972 (2011) and On Line: Drawing through the Twentieth Century (2010), and co-curated the survey Greater New York (2010) at MoMA PS1.

She is the co-editor of Modern Women: Women Artists at the Museum of Modern Art, a groundbreaking examination of works by modern and contemporary women artists in MoMA's collection. From 1996–2006 she served as curator at MOCA, Los Angeles where she organized the internationally acclaimed exhibition WACK! Art and the Feminist Revolution (2007). Ms Butler is currently a curator for Adrian Piper: A Synthesis of Intuitions, the artist’s first North American retrospective that will open at MoMA and travel to the Hammer Museum in fall 2019.

Donna De Salvo joined the Whitney in 2004 and was the museum’s first Chief Curator from 2006 to 2015. As Chief Curator and Deputy Director for Programs, Ms De Salvo oversaw the museum’s artistic program, was instrumental in the design of the Whitney’s new building, and led the curatorial team for the museum’s inaugural presentation, America Is Hard to See (2015).

Now as Deputy Director for International Initiatives and Senior Curator, she is is leading the museum’s efforts to define and communicate an expanded notion of art in the United States, both domestically and internationally, through artistic and education programs and other initiatives. In addition, she organizes exhibitions and collection displays, co-directs the Painting and Sculpture Acquisition Committee, and oversees the Andy Warhol films catalogue raisonné project.

Okwui Enwezor is the former Director of the Haus der Kunst in Munich. Since his 1996 breakthrough as a curator of In/Sight: African Photographers, 1940 to Present at the Guggenheim, he has alternated between ambitious international exhibitions that seek to define their moment – biennials in Johannesburg, Gwangju and beyond, along with the Paris Triennale in 2012 – and historically driven, encyclopedic museum shows centered on topics such as African liberation movements in the 20th century, the arc of apartheid and the use of archive material in contemporary art.

Enwezor is the first curator of his generation, and the second ever, to curate both Documenta and the Venice Biennale, and the first African to direct either one. He has curated numerous exhibitions in many other distinguished museums around the world, including the Museum of Contemporary Art, Chicago, Guggenheim, Tate Modern and the Museum of Contemporary Art, Barcelona. In 2016-2017, Enwezor directed Postwar Art between the Pacific and Atlantic, 1945-1965, a major exhibition at the Haus der Kunst exploring the complex histories of art of the postwar era.

As a writer, critic, and editor, Enwezor has been a regular contributor to numerous exhibition catalogues, anthologies, and journals. He is founding editor and publisher of the critical art journal NKA: Journal of Contemporary African Art.

Emilie Gordenker has been director of the Mauritshuis since January 2008.

Gordenker was awarded her doctorate in 1998 by the Institute of Fine Arts, New York University. Her thesis, Van Dyck and the Representation of Dress in Seventeenth-Century Portraiture, was published in 2001 by Brepols Publishers, Turnhout, Belgium. During her time in New York, she worked for the Metropolitan Museum of Art, The Frick Collection and the Netherlands Institute for Art History, and lectured at Rutgers University, New York University, Vassar College and the Bard Graduate Center for Decorative Arts.

From 1999 to 2003, Gordenker worked in London for companies in the domain of new media while also continuing to publish on her specialism and related subjects. In December 2003, she was named Senior Curator of Early Netherlandish, Dutch and Flemish Art at the Scottish National Gallery in Edinburgh. In January 2008, she was appointed director of the Mauritshuis.

At the Mauritshuis, she has led the major renovation and expansion of the museum, which was completed on time in June 2014. She continues to publish scholarly articles, create exhibitions for the museum and serves on several boards.

Allan Schwartzman is a Founder and Principal of Art Agency, Partners and Chairman of the Fine Art Division of Sotheby’s. He has more than 20 years’ experience in advising some of the world’s most important collectors in forming their holdings of contemporary art, both individually and in conjunction with their stewardship of major museums.

Schwartzman is also widely respected as a curator, most notably for Instituto Inhotim, the visionary contemporary art park in Brazil. As Creative Director and Chief Curator of Inhotim, he has been central to developing the collection of the renowned institution and commissioning its site-specific works by artists including Chris Burden, Giuseppe Penone, Matthew Barney, Doris Salcedo, Doug Aitken, Rivane Neuenschwander, Olafur Eliasson, and Rirkrit Tiravanija, including projects that could not have been realized anywhere else.

Trained as an art historian, Schwartzman was a founding staff member of the New Museum of Contemporary Art in New York and served as curator from 1977 to 1980. He has written extensively for publications including The New Yorker, The New York Times, and numerous other noted periodicals.

Sir Nicholas Serota is Chair of Arts Council England and a member of the BBC Board. He was Director of Tate from 1988 to 2017.

During this period Tate opened Tate St Ives (1993 and extension 2017) and Tate Modern (2000 and extension 2016), redefining the Millbank building as Tate Britain (2000). Tate also broadened its field of interest to include twentieth-century photography, film, performance and occasionally architecture, as well as collecting from Latin America, Asia, the Middle East and Africa. The national role of the Gallery was developed through the creation of the Plus Tate network of 35 institutions across the UK and Northern Ireland.

What is the Sotheby’s Prize?
The Sotheby's Prize is an annual award of up to $250,000 to support and encourage museums to break new ground. The grant aims to recognize curatorial excellence, and to facilitate exhibitions that explore overlooked or under-represented areas of art history.

How do I apply for the Sotheby’s Prize?
Visit prize.sothebys.com to submit an application.

What is required for the application?
The application consists of five sections. A one-page summary of the proposed exhibition; a status report on the exhibition, indicating how far along it is in the planning; the amount of funding required; an exhibition budget; and a letter(s) of support from the director of the institution hosting the exhibition.

What happens after I submit my application?
Upon submission you will be able to track your application on the application site. The jury will meet in September 2018 to make its final decision.

Who will select the winner?
The winner will be selected by a jury comprising of Sir Nicholas Serota (Chair, Arts Council England), Connie Butler (Chief Curator at the Hammer Museum in Los Angeles), Okwui Enwezor (Director of the Haus der Kunst museum in Munich) and Donna de Salvo (Senior Curator at the Whitney Museum of American Art in New York). The jury will be chaired by Allan Schwartzman (Chairman of the Fine Art Division of Sotheby’s).