P apa Ibra Tall was born in Tivavouane, Senegal in 1935. He studied architecture in Paris at the École Spéciale d’Architecture et des Beaux-Arts in 1955. Encouraged by the poet and philosopher Léopold Sédar Senghor to pursue fine arts instead, he attended the École Superieure des Beaux-Arts and then studied at the Craft school of Sèvres. The artist was trained to work in a variety of media: oil paint, silk screen printing, tapestry and mosaic. In Paris he was involved in debates about Negritude theory and first encountered black American jazz. Tall left Paris to travel the United States, meeting the Jazz musician John Coltrane and the civil rights activist Malcolm X. After Senegal’s independence in 1960, Senghor became the country’s first president and invited Tall to lead the Section de Recherches en Arts Plastiques Nègres, encouraging young African artists to use African subject matter and to rely less on the influence of Western art.

“So at the time it was a question of creating, for myself, an artistic language which seemed to me to belong to Africa and to Senegal. I concluded that art is universal but that it was necessary for there to be particularities that one had to transcend to achieve this universality. So I thought that I couldn’t imitate what the French were doing. I was completely outside of that tradition. Therefore, I thought that it was necessary for me to construct a completely new language”.

Papa Ibra Tall created a tapestry workshop in his department, inspiring his students to work using decorative arts; this was to become a centre for monumental tapestry production.

In 1966, Senghor created the first Festival Mondial des Arts nègres, which took place in Dakar, Senegal. The event brought together thousands of artists, musicians and writers from across Africa and its diaspora, including André Malraux, Aimé Césaire, Duke Ellington and Josephine Baker amongst others. In the context of decolonization and the civil rights movement in the United States, this festival aimed to recognise and celebrate art by black artists and writers. The festival continues today, with its most recently themed ‘African Renaissance’ Festival, which happened in 2011.

Papa Ibra Tall’s The Warrior (1966) was exhibited at the inaugural event. The Senegalese painter gifted the work to his friend, the musician, Duke Ellington. Ellington praised Tall’s art in his memoirs: “it is impossible to miss the feeling of Old Africa in each and every stroke of his work”. This painting demonstrates the artist’s technical skill at creating figurative compositions and the crossover between his designs for tapestries and paintings. The mass of lines radiating out from and intersecting the figure create a sense of woven threads, integrating the figure within the pictorial field.

Tall participated in the 8th Biennial of Arts of São Paolo (1965), the first World Festival of Negro Arts in Dakar (1966), the first Pan-African Festival of Algiers (1969) and the first Salon of Senegalese artists at the Museum Dynamique de Dakar (1973). His works have been exhibited at the National Art Gallery of Dakar (1991) and most recently during the 55th Venice Biennial, at the Encyclopedic Palace in 2013. 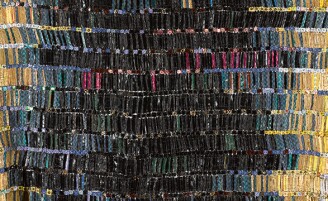