B ridging naturalism with geometry, Frank Lloyd Wright’s shimmering “Sumac” windows are among his most sophisticated explorations in the medium of stained glass. Created for one of Wright’s most important early commissions, the Susan Lawrence Dana House (1902–04) in Springfield, Illinois, the “Sumac” panels are further distinguished by their recently rediscovered provenance. Featured in the Chicago Architectural Club’s annual exhibition in 1907, the whereabouts of these historically important windows were unknown – until now. Their presentation at Sotheby’s Important Design sale on 13 December will be a landmark occasion.

The Dana House is one of Wright’s largest and most decoratively ambitious Prairie-period buildings. It also includes his most complex leaded-glass window programme, with different designs spread across more than 250 windows. All were executed by the Linden Glass Company of Chicago, Wright’s preferred producer and the firm that created more glass for him than any other. The “Sumac” panels offered by Sotheby’s share the same design of a pair of doors in the Dana House reception room – Wright recalled that room’s doors and windows as the “finest of all” of his glass designs. It is not surprising that Wright included a pair of “Sumac” windows among the 38 projects he chose for an ambitious solo presentation at the Chicago Architectural Club’s annual exhibition at the Art Institute in 1907.

As historian Kathryn Smith writes in her recent book Wright on Exhibit, the show included all the “masterpieces” of the architect’s Prairie period and was one of the most important of his career. Wright did not merely hang drawings in a gallery; rather, as Smith notes, he created an environment that was not unlike his own studio, with models of recent buildings displayed on plinths, framed and unframed drawings hung salon style and photographs scattered on a table to be perused by visitors.

We know all of this because Wright commissioned Henry Fuermann and Sons, his favoured architectural photographers, to document the installation. Following the exhibition, the location of the “Sumac” windows was not known; but by the early 1940s, the panels were in the possession of Nels Ernest Johnson, who lived in the Edgewater neighborhood of Chicago worked for the Linden Glass Company. In the mid-1940s, the Johnsons moved and passed the windows to the Phillips family, their neighbors and close friends, and years later they were acquired privately by the present owner. Aided by the photographs of the 1907 exhibition, Sotheby’s specialists recently traced the windows’ storied provenance, confirming their importance in Wright’s oeuvre. A century after their historic exhibition at the Art Institute of Chicago, the “Sumac” windows will be on view at Sotheby’s New York, 9–12 December. 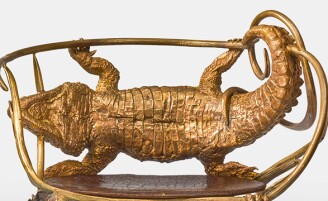