The Pink Star: One of the World’s Great Natural Treasures

T he Pink Star will lead the sale of Magnificent Jewels and Jadeite in Hong Kong on 4 April.

Estimated in excess of US$60 million/HK$468 million, this 59.60-carat oval mixed-cut pink diamond is the largest Fancy Vivid Pink, Internally Flawless diamond that the Gemological Institute of America (GIA) has ever graded.

Announcing the forthcoming sale, David Bennett, Worldwide Chairman of Sotheby’s Jewellery Division, said: “At a time of unprecedented demand for the finest in coloured diamonds, I am delighted to be bringing this magnificent stone back to the market.  The extraordinary size of this 59.60-carat diamond, paired with its richness of colour, surpasses any known pink diamond recorded in history.”

The Pink Star has received the highest colour and clarity grades from the GIA for pink diamonds and has been found to be part of the rare subgroup comprising less than 2% of all gem diamonds - known as Type IIa, stones in this group are chemically the purest of all diamond crystals and often have extraordinary optical transparency.

Mined by De Beers in Africa in 1999, the 132.5 carat rough diamond was meticulously cut and polished over a period of two years and transformed into this stunning gemstone. According to the records of the GIA Laboratory, the Pink Star is the largest Flawless or Internally Flawless, Fancy Vivid Pink, Natural Colour, diamond they have graded in a letter issued in April 2016.

The sale of the Pink Star continues Sotheby’s tradition of bringing some of the rarest and most extraordinary collectibles to market.

Sotheby’s has sold a number of the most valuable diamonds in the world, and holds the current price-per-carat auction record for any diamond or any gemstone with The Blue Moon of Josephine, a 12.03-carat cushion-shaped Fancy Vivid Blue, Internally Flawless diamond that sold for US$48.5 million at Sotheby’s Geneva in 2015.

The Pink Star will be on exhibition in Hong Kong from 31 March–3 April. The Magnificent Jewels and Jadeite sale is in Hong Kong on 4 April. 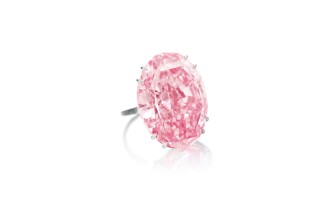 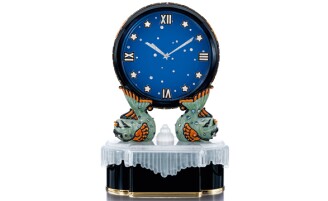