The Life of Artist and Sculptor Albert Cheuret

T hough works by the sculptor Albert Cheuret were quite prominent, his life story and artistic output remain relatively unknown. Hence his granddaughter, Catherine Bernard, has kept archives, drawings and some photographs of her beloved grandfather in an old-fashioned suitcase, to convey to us the journey of this important Art Deco sculptor.

In her Parisian apartments on Rue Cambon and Rue de l'Université, as well as in her Cap Ferret villa, we find displayed his stork wall lights, owl mirror, sculptures, pieces of furniture, and even his famous bronze and alabaster lights. Catherine Bernard has also attentively conserved some preparatory studies for the latter.

Albert Cheuret was born in 1884 in Paris. He studied sculpture with Jacques Perrin, professor at the Ecole des Beaux Arts in Paris (fine arts school), and with Georges Lemaire. The artist began his career in 1907 and set up his studio at 11 Avenue Franco-Russe, near the Champ de Mars. In 1908, he received 1st prize in the Ornamental Sculpture competition organized by the Réunion des fabricants de bronze (bronze manufacturers guild) founded in 1818. He exhibited regularly at the Salon of French Artists. He was an officer in the 1st engineering corps during WWI. Wounded twice, he was awarded Knight of the Legion of Honour in 1920.

Albert Cheuret was also granted numerous commissions for commemorative structures, notably for the cemeteries of Montparnasse and Père Lachaise in Paris, as well as the war memorial for the city of Cannes.

At the Universal Exhibition in Paris in 1925, Albert Cheuret rented a stall along the Alexandre III bridge and presented his famous light fixtures in bronze and alabaster, his favorite materials. He also exhibited clocks, animal figures, and furniture - tables, consoles, end tables - whose sculptural crafting attests to his talent as an artist.

His style is characterized by a fabulous naturalistic ingenuity drawn from a bestial repertoire and exotic flora, often depicting birds (herons, raptors, pheasants, or owls) while superimposing a geometric decor typical of the Art Deco style on some of his creations.

The items that we are presenting pay homage to the imaginative genius of an artist. 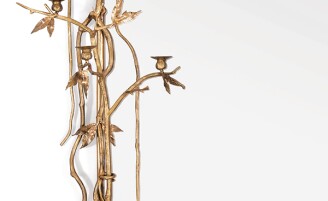