The Life and Loves of Mona Bismarck

B orn in Louisville, Kentucky in 1897, Mona Travis Atrader had been twice married and divorced by the age of 27; first to wealthy businessman Henry Schlesinger in 1917, and then to affluent banker James Irving Bush, said to be the most handsome man in America.

In 1924 she settled in New York and soon met Harrison Williams, 24 years her senior, who was one of the richest men in America; they married in 1926. After their round-the-world honeymoon cruise on Williams’ yacht Warrior, the largest and most expensive pleasure boat in the world at the time, the couple moved into a neo-Georgian mansion on upper Fifth Avenue in New York and acquired Oak Point, a huge property in Bayville on Long Island North Shore, as well as a home in Palm Beach and the Villa Il Fortino in Capri. Her husband’s fortune gave Mona free rein in her love of the arts. She purchased works by Goya, Tiepolo and Fragonard to furnish the New York estate, and also commissioned contemporary decorators, such as José Maria Sert and Syrie Maugham, to decorate her homes.

Mona became a lifelong friend and photographic subject for Cecil Beaton. He described her as “one of the few outstanding beauties of the thirties… who represented the epitome of all that taste and luxury can bring to flower”. By the early 1930s, Mona’s beauty and elegance were a subject of note on both sides of the Atlantic. In 1933 she was voted “the best-dressed woman in the world” in the annual poll held by the major French couturiers, including Chanel, Molyneux, Vionnet, Lelong and Lanvin. In the photographic portraits of Mona taken in the late 1920s and 1930s, her beauty is enhanced by her stylish period jewels. Like many of her contemporaries, she had her jewels redesigned to keep up with the fashion, so only a few of her Art Deco pieces survive in their original form. One such piece is the Cartier brooch which features in the Magnificent Jewels and Noble Jewels sale in Geneva on 16 May.


When her husband Harrison Williams died at Oak Point in 1953, Mona inherited a vast fortune. The following year, she married Edward, Count von Bismarck, grandson of Otto von Bismarck, chancellor of Germany. They moved to Europe, and in 1956 they purchased a hôtel particulier in Paris at 34 Avenue de New York, which she completely redecorated. Mona was a glamorous and admired hostess in Paris and on Capri, entertaining guests such as the Duke and Duchess of Windsor, Winston Churchill, Aristotle Onassis and Maria Callas. She was always resplendent in her jewels and beautiful gowns.

MONA AT THE HOTEL LAMBERT IN PARIS WITH (LEFT) PORTRAIT BY SALVADOR DALÍ, SOLD FOR £2,281,250 AT SOTHEBY'S IN 2013
© THE CECIL BEATON STUDIO ARCHIVE AT SOTHEBY’S

After the death of Count von Bismarck in 1970, Mona had an unhappy marriage to Umberto de Martini, who died in a car accident in 1979. Her last years were spent quietly and she died in Paris in 1983 at the age of 86. Her legacy continues in a foundation that bears her name, based in her home in Paris, which fosters Franco-American friendship through art and culture.

In 1986, Sotheby’s Geneva sold Mona’s magnificent collection of jewels that demonstrated her love of beautiful gemstones, as well as her devotion to the luxurious pursuits of life.

The Magnificent Jewels and Noble Jewels sale in Geneva on 16 May. 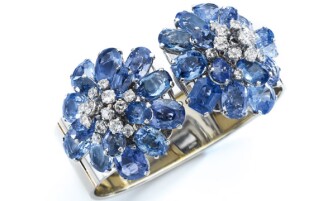