The Illustrated Lives of Pierre Le-Tan

T here are losses that fill you with melancholy and regret, sometimes even with a very gentle form of hope, the hope of weaving together the threads of a portrait, of a life, when the time comes. One day, Pierre Le-Tan will deserve a biography as the English do it best, solid, full of insight and detail, with serious footnotes that ground each fact, each encounter and each commission. 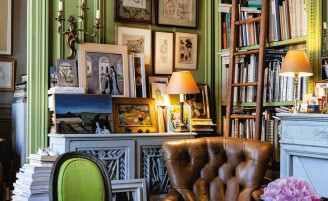 Of these copious biographies that he must have loved; the life of Edith Sitwell or that of Rex Whistler, Edward James or Lee Miller. In his life, among the innumerable drawings and collections gathered, then dispersed, then reimagined, Pierre Le-Tan left fascinating little notebooks, more specifically agendas: the writing is telegraphic, the information is precise though not exhaustive - a name at lunch, a visit with a friend, an appointment with a client, a stop at Hôtel Drouot... and always the names of his beloved children, and those of the women he loved. Names of places, names of people, whispers of Marcel Proust.

In the absence of such a biography, we can pull fragments together. For an artist, nothing is innocent, above all one’s roots, a filial compassion for one’s father, a mixture of the Asian respect for family and the classical image of the Lares deities: his father Lê Phô was a painter who was born in Vietnam and died in Paris, a beloved city where he settled permanently in 1937. A major painter, far too little known in Europe, already revered in China, he alone carried a nostalgia in which Pierre Le Tan’s ancestry was steeped, both the real and the imaginary ones that would nurture his life and his work.

In his paintings are immersed the reflections of the cultivated and refined dynasties of the mandarin elite, the monumental sweetness of the Hue royal palace, the last glimmers of the reign of the emperor Bao Dai. Intensely Parisian, that is to say a lover of cosmopolitanism and literature, Pierre Le-Tan never forgot the artistic heritage from which he derived, and in his father's case, an aesthetic birthright and an atavistic passion, collecting.

The Life and Work of Pierre Le Tan

In his book Quelques collectionneurs, published in 2013, it is hard to remain indifferent to the homage he pays to his father: the book opens with his portrait, the table of contents does not mention him by name, but his presence is everywhere, humbly delivering the key to dreams, between the invisible collection of the Princess of Brioni and the labyrinthine collection of Pierre Rosenberg.

Art, the collection, everything was laid down very early on, as if on baptismal grounds: Pierre Le-Tan was born in Neuilly-sur-Seine in 1950, just far enough away from Paris to be able to see the city with greater contrast, in its lights, which he will point out with delight, and its shadows, which he will walk in endlessly, like his twin in walking, Patrick Modiano. In his youth, one has the “Morandian” impression of a certain speed. Are you already an adult, or still a teenager, when at the age of 17, you send your drawings to the New Yorker, and very quickly go from the decorative cul-de-lampe to the cover of the magazine, barely two years later? At 19 years old, two covers, while others are measuring your talent, he measures his luck.

In his great discretion, his mother was always watching over him, she always appeared as the protective and benevolent figure who opened a door, to a professional relationship, or to the imaginary. It is true that things moved quickly but they were also developed under the benevolent guidance of a remarkable agent, Ted Riley, who had grasped the original and singular talent of the young Pierre, curious about everything, thirsty for literature, but also fundamentally attracted by detail, that we know to be revealing, the allure of a woman in a salon, linguistic tics, the features of interior decoration, the way to set up a table or a desk, the esprit that goes into the hanging of our collections, whether modest or expensive. Low and high. True generosity is to be interested in every detail; in very busy people, a certain sense of physiognomy is a human quality, because nothing is worse than indifference, towards people as well as towards things.

In so few years, to have built such a dense, diversified body of work is almost dizzying, one feels like compiling titles and names, like a frenzied list, where everything fits together: Mario Soldati or Raymond Carver, Vogue or the New York Times Magazine, Tatler or World of Interiors, not to mention the affectionate and fruitful complicity with Patrick Modiano starting in 1981 with the marvelous Memory Lane. Intensely, without hiding behind the primacy of great Art with a very capital A, and without false modesty, Pierre Le-Tan claimed his work as a draftsman, a “dessinateur”, a magnificent word, which refers as much to Plutarch as to the golden age of magazines, he worked on commissions for Lanvin, the Galeries Lafayette, the Salon du Dessin, Gucci, and so many others, pell-mell and always true to himself.

He also liked to narrate his own stories, of missed appointments, strange places and mysterious destinies. In the chaos of the world, his limpid, elegant writing set the lines, the landmarks, the Amers so dear to Saint-John Perse. There again, the fragments, what he lived and saw, what he heard, what he surreptitiously came across, the rumors of life and History. These illustrious lives that, far away or close by, wedded the same path.

Like any great artist, his work speaks as much as he did, one is always surprised at the laconic silence of these interviews, his marvelous discussion with Simon Liberati in the magazine Purple in 2008, "yes", "no", "perhaps", where Liberati as the exacting and ideal writer draws a “portrait en creux” of the one he questions, the privilege of friendship. In 2016, he opened up but little more to Chris Kontos in Kennedy magazine.

What truly counts are the drawings by the thousands, where he liked to play with his hatched lines that were so precise, embellished with colors chosen with an exceptional eye - it will have to be said and written one day to what degree Pierre Le-Tan was also a great colorist ... The colors of his drawings, the colors of his covers for Le Promeneur and the pépites of Patrick Mauriès, colors of the Iznik and antique textiles whose installation in his apartment in the Place du Palais-Bourbon had nothing to do with chance, but rather with the needs of the objects among themselves, objects that speak to each other and attract each other, objects that spoke to him, as they signaled to Balzac’s Cousin Pons : “chit! chit!..”.

Never far from Pierre Le-Tan are his collections, to disperse them might seem paradoxical, except that he himself one day had already dispersed a first one. When one has so madly enjoyed the hunting, discovering, bidding and patiently seeking unexpected finds, there is undoubtedly a last elegant gesture in offering this sensation that is so addictive, this pleasure of the insider, to others - the Goncourt brothers side of things. In a delightful moment during his conversation with Simon Liberati, the latter’s slip of the tongue when asking about Bérard's influence on the art of Le-Tan: the illustrator, his friend, corrected him with affection: “Not Victor Bérard, Christian Bérard!”.

Our subconscious often catches up with us: Victor Bérard, the Hellenist and diplomat, the translator of The Odyssey, the author of the Navigations d’Ulysse, and Christian Bérard, the beloved painter, as if mirroring his own life: "Christian Bérard is a very good painter. We often take him for a socialite, a dilettante. In fact, he is a very great artist. Better than Balthus, less constructed, more flowing. His sketches, his little doodles are wonderful, even the smallest of them is very precise”. Ulysses, the voyage, Tonkin, New York, Penelope, his sons Bérard, Victor and Christian, Pierre Le-Tan, an oeuvre and a collection, Vies illustres.