The Hybrid Brilliance of the Company School Paintings

S otheby’s sale of Carlton Rochell’s remarkable collection of Indian paintings, In an Indian Garden, is the first ever dedicated sale of this work in the UK. It showcases the work of a series of extraordinary Indian artists, each with their own style and tastes and agency.

The sale consists of works commissioned by East India Company officers between roughly 1770 and 1840. It represents a once-in-a-lifetime chance to acquire some of the finest Indian paintings ever painted, which Carlton Rochell brilliantly brought together from different private collections around the world. It includes some highlights from the Indian collections of American collectors Edward Binney III and Stuart Cary Welch, as well as that of Jacqueline Kennedy Onassis. It presents an opportunity few connoisseurs of Indian art will be able to resist.

These paintings, often of astonishing brilliance, and possessing a startlingly hybrid originality, represent the last phase of Indian artistic genius before the onset of the twin assaults—photography and the influence of western colonial art schools—ended a tradition of painting going back two thousand years.

The artists who produced these works were drawn from a wide variety of Indian artistic traditions—Mughal, Maratha, Tamil and Telegu— and an equally wide range of castes and communities, ranging from titled Imperial office-holders like the grand Mughal artist Ghulam Ali Khan, to much more humble artists, who described themselves as moochies and who seem originally to have been leather workers, and so technically untouchable Dalits, the very bottom of the Indian social scale. Some appear to have been kalamkari textile painters, before being recruited by Company botanists, others hailed from the gudyar sandalwood-carver caste.

All the artists in this sale had clearly trained in the Mughal style, and used Mughal stone-based pigments, but working on European paper. Having been shown models of European natural history images – such as the Comte de Buffon’s Histoire Naturelle des Oiseux – they gave birth to a new hybrid style, one that was unquestionably Mughal, but with a strong European influence.

Two worlds are meeting in all these paintings, coming for the first time into intimate contact. For this is a period which was far more ethnically mixed and culturally hybrid than we imagine: the wills of East India Company officials from the late 1770s show that more than one third of the British men in India were leaving all their possessions to one or more Indian wives, or to Anglo-Indian children. It is significant that this surprises us as much as it does: it is as if the later Victorians succeeded in colonising not just India but also, more permanently, our imaginations, to the exclusion of all other images of the Indo-British encounter.

Since the art historian Mildred Archer began writing on these paintings in the 1950s, works such as these have been known as ‘Company School’, an English translation of an Urdu term which she found being used for such works in Patna, kampani qalam. The term is useful and is probably unavoidable, but it is also a little problematic, for it emphasises Colonial patronage of these works over the artistic endeavours of the brilliant Indian artists who actually painted the works; and it has led to the genre being left in something of a post-Colonial limbo, largely disowned by Indians and forgotten and ignored by the descendants of their former Colonial masters.

Yet as the brilliant art works in this sale demonstrate, the very diverse works that have come to be grouped as ‘Company School paintings’ include some of the greatest masterworks of all Indian art. 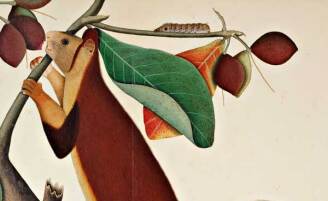 Past Auction
IN AN INDIAN GARDEN: The Carlton Rochell Collection of Company School Paintings
27 October 2021 | 11:00 AM BST | London
Art Voices