The Heartfelt Story Behind Grant Wood’s Portrait of his Sister

Painted in 1931, a year after Grant Wood completed his iconic American Gothic, Portrait of Nan is without question the most personal work of the artist’s distinguished oeuvre. The painting of his beloved sister was the only work that Wood claimed he would never sell and it was, in fact, the only major work in oil which the artist kept for himself throughout his life. Before Portrait of Nan comes to auction at Sotheby's American Art Sale ( 16 November, New York), discover the artistic and personal saga that prompted its creation.


B orn in 1891, in a farm house four miles east of Anamosa, Iowa, Grant Wood rose to prominence with his depictions of rural American life and later became a leading figure in the Regionalist movement alongside fellow Midwesterners Thomas Hart Benton and John Steuart Curry. It was his 1930 American Gothic, with its wry depiction of a man and woman before a gothic farmhouse, that launched the artist to the heights of fame and national celebrity. One of the highlights of the collection of the Art Institute of Chicago, it is frequently regarded as the most famous American painting of the 20th century. As the model for the female figure, Wood had used his younger sister Nan.

Though American Gothic cemented Wood's fame, many Midwesterners viewed the painting with suspicion, believing the image to be cruel satire of rural Midwestern farm life. Nan's fictionalized depiction roused particular hostility: "That woman’s face would positively sour milk” wrote one farmer's wife.1 Such comments were believed to have very much hurt Wood's sister, who was quickly recognized as the model.

"Although I was very proud to have posed for American Gothic, Grant thought I might be hurt underneath, so he decided to paint a portrait of me."

Born eight years apart, Nan was the youngest of Wood’s three siblings and the pair shared an unusually deep bond, with Wood taking financial responsibility both for his sister and their mother throughout his life. Wood's return to Nan as subject matter served both as a heartfelt apology for the harsh words inadvertently leveled at his sister by viewers and critics as well as an attempt to reconcile his standing in Iowa among those who thought American Gothic had disparaged Midwesterners. “After Grant painted American Gothic,” Nan commented, “I was kidded so much about it that it bothered Grant. Although I was very proud to have posed for American Gothic, Grant thought I might be hurt underneath, so he decided to paint a portrait of me." 2

At once a simple, straightforward portrait of his closest sibling, this painting simultaneously abounds with complex individual symbolism and references to early American history. It also presents Wood at his most confident, a freshly successful artist working in a mature style with a reinforced artistic vision. Here, he depicts Nan seated in a painted Hitchcock chair before a large green curtain held back by an antique drapery knob. In her hands, she presents a small yellow chick and a ripe plum.

Differing dramatically from her appearance in American Gothic, Wood shows her in contemporary and casual summer blouse with a fashionable marcelled hairstyle. The portrait’s oval format, framing curtain, mannered style, and Hitchcock chair all reference early American portraiture and folk painting. Nan’s arresting gaze is both direct and impenetrable; it has been described as a “latter-day Mona Lisa.” 3

The chick and the plum reinforce certain formal qualities, with the yellow of the chick repeating the color of Nan's hair and the plum highlighting the tones of the background wall. Symbolically the plum has traditionally been associated with femininity, while the chick, perched both young and vulnerable in Nan’s cupped hand, may convey Wood's tenderness toward his younger sister. It is interesting to note that in his later allegorical self-portrait Study for Adolescence, Wood presented a young rooster as a substitute for himself using the same chick that his sister holds in the present painting.

Moreover, the inclusion of the small chick and the framing curtain seen in Portrait of Nan directly relates to the long tradition of American portrait-painting, as exemplified in John Singleton Copley’s A Boy with a Flying Squirrel (Henry Pelham) (1765) and Charles Willson Peale’s The Artist in His Museum (1822).

After completing the work, Wood told his sister, “It’s the last portrait I intend to paint, and it’s the last time you will ever pose for me." 4 Though ostensibly painted as a gift for Nan, the artist decided to keep the portrait for himself. According to Wood, it was the only painting he refused to sell. When he moved from Cedar Rapids to Iowa City in 1935, he designed his entire living room around the work, which hung above the fireplace. At the time of Wood’s death in 1942, the present work was one of only two paintings left in his possession. Portrait of Nan will be on view at Sotheby's New York galleries from 13 November alongside other American Art highlights. 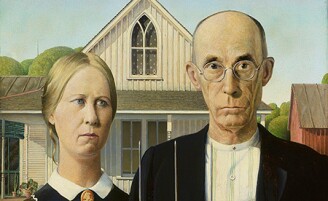