The Edgy and Exciting Jewellery of Andrew Grima

A ndrew Grima's daring imaginative and charismatic designs made him a revolutionary of 1960s British jewellery. Entirely self-taught, Roman-born Grima studied mechanical engineering in London before joining the Royal Engineers during World War II. After the war, Grima begin work in the accounts division of his father-in-law’s jewellery firm in London before moving into the design department.

Edgy and exciting, Grim gathered a cult following of celebrity. He became the go-to society jeweller to the elite. Prince Philip gifted Queen Elizabeth a ruby and diamond brooch, while Princess Margaret, Jackie Kennedy Onassis, Ursula Andress and Estée Lauder were among his clients. In 2012, Estée Lauder’s White Gold and Diamond Pendant-Brooch sold for double its estimate in the Sotheby's New York Magnificent Jewels sale.

Today Grima is recognised as one of the great modernist jewellery designers of the 20th century. His creations often top auction charts and sell over their estimates. His work can be seen at the Victoria & Albert Museum, while fashion designers Marc Jacobs and Miuccia Prada are collectors. 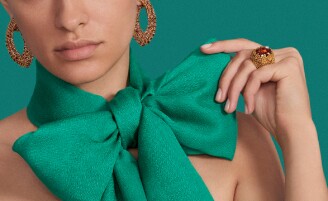