By Sotheby's
The current landscape of contemporary figurative painting has certainly seen a resurgence over the last few years. Whether it is the appeal of Lucien Freud’s very human portraits with the physical flaws of his subjects depicted or the recent strong auction prices at Sotheby’s for Jenny Saville’s provocative canvases, these works resonate with collectors today as society re-evaluates its cultural obsession with the body.

K aterina Belkina, born in Samara, Russia in 1974 is best known for her digitally manipulated self-portraits. She combines her photographic and painting skills together to create portraits that according to the artist “seek out the hidden layers in people”. Blurring the boundaries between painting and photography Belkina’s work investigates the role of woman in society, as well as the artist/model dichotomy.

For Schiele is part of Belkina’s series of works, PAINT, where she pays tribute to the past masters who inspired her. Here the artist is posing in perhaps a more revelatory or intimate way than any other work in the series, her facial expression grave and portraying vulnerability. Rather like Egon Schiele’s Self-Portrait with Physalis, 1912 Belkina takes advantage of the total freedom allowed through using herself as the subject of her work.

“My face and body are the main instruments I use to incarnate the images I want. Standing in front of the camera as a model, I follow the age-old theatrical practice of playing roles.”

For Klimt is a contemporary rendition of the decorative patterns used by Gustav Klimt in his paintings. Instead of the gold leaf and byzantine ornamentation found in Klimt’s work, Belkina teases her audience with modern household objects, almost to mock the materialistic society that so engulfs every day life. Belkina perceives a major creative force in the tension and interaction between painter and model. By placing herself as the main protagonist in the recreated works, Belkina becomes both model and creator, thus entering into dialogues between herself and her artistic inspirations, and between herself as model, muse and painter. 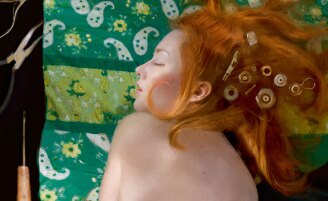