The Classical Now – Ancient Art in the Modern Imagination

A new exhibition at King’s College London explores the enduring legacy of ancient Greek and Roman art, focussing on the period from the 1930s to the present day.

Think of Greek and Roman antiquities, and particular sorts of galleries come to mind. Ancient objects are usually exhibited with a view to their history – that is, about what can they tell us about the classical past. But these artefacts were not always 'ancient': they were once 'contemporary'. By extension, museums and scholars can conspire to concentrate on the 'history' of classical materials at the cost of their abiding presence. The reasonable concern to understand what the classical was can eclipse reflection about what it is – and about our continuing relationships with its legacy today.

The Classical Now experiments with new ways of challenging this status quo. There is no shortage of ancient objects among the 50 or so objects on display: an exceptionally rare bronze head of Apollo, for example, a marble statuette of Crouching Venus (complete with eighteenth-century base), a Roman mosaic with central Gorgon, or an Attic red-figure amphora from the fifth century BC. But interspersed among these antiquities are works by some of the biggest names in the modern and contemporary art world.

Edward Allington, Jean Cocteau, André Derain, Damien Hirst, Yves Klein, Louise Lawler, Roy Lichtenstein, Bruce Nauman, Grayson Perry, Frances Picabia, Pablo Picasso, Marc Quinn, Rachel Whiteread: these are just some of the thirty major artists featured in the show, which aims to rethink the classical through the lens of the modern (and vice versa). What is it about ancient art that still provokes the contemporary imagination? How might contemporary visual culture help us to see classical traditions with new eyes? And what can modern-day responses – set against the backdrop of others over the last two millennia – tell us about our own cultural preoccupations, in the here and now?

Questions like these showcase the academic research agenda from which the exhibition derives. The Classical Now forms part of a project on 'Modern Classicisms' in the Department of Classics at King’s; it is displayed across two newly acquired university gallery spaces – Bush House Arcade and the Inigo Rooms in Somerset House East Wing.

Importantly, the exhibition has been run in partnership with other collaborators. In realizing the exhibition, King’s teamed up with MACM (Musée d’Art Classique de Mougins), founded by collector Christian Levett in 2011. Twenty of the loans to the show – around a third of the total – come from Levett’s own collection. By extension, the aim of displaying antiquities alongside works that respond to classical traditions takes its inspiration from Mougins: The Classical Now has handpicked a selection of the Mougins works, and brought many of them to London for the first time.

The curatorial team at King’s – led by Michael Squire, and working in close partnership with Levett and MACM – has represented all manner of artistic media. Alongside sculpture, painting, ceramics, etchings and photography, five films have been included – among them a video of Bruce Nauman’s much acclaimed 1963 performance, Walk with Contrapposto.

The exhibition also turns the architectural backdrop of Bush House – itself a showpiece of modern classical architecture from the 1920s – into part of the show. The Classical Now is the first major exhibition in the refurbished Arcade gallery, opened to the public in September 2017. In a witty feat, Léo Caillard was commissioned to install a work in the arch overlooking Kingsway – dressing up the colossal classicising sculptures of America and Britain in contemporary t-shirts, scarves and glasses. "With Caillard’s installation, we wanted to project The Classical Now onto the actual cityscape of London", Squire explains.

The Bush House space of The Classical Now functions as 'overture', complete with works by Edward Allington, Damien Hirst, Pablo Picasso, Marc Quinn and Sacha Sosno (alongside six video-interviews with Matthew Barney, Paul Chan, Urs Fischer, Jeff Koons, Asad Raza and Kaari Upson). But the majority of works are displayed in a series of galleries in Somerset House East Wing, arranged according to the themes of 'place', 'myth' and 'pose'.

The choice of timeframe, focused especially on the second half of the twentieth and early twenty-first centuries, takes its lead from the research programme behind the show. In art historical circles, the stories told of modern and contemporary seldom make reference to ancient materials: the emergence of ever-new Modernist movements – in particular after World War II – is conventionally defined around a break with the past. The quest to rethink the 'classical' through the lens of the 'modern' and 'contemporary' tenders a deliberate provocation. The Classical Now delights in the wonderful irony of showcasing the abiding force of Graeco-Roman traditions precisely through those materials deemed most conspicuously to have debunked them. 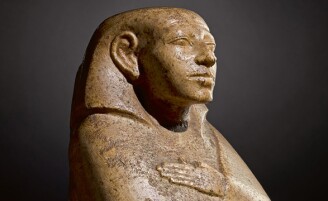