T he largest UK exhibition of works by Takis is due to open on 3 July at the Tate Modern. Showcasing over 70 works from the artist's career, the exhibition will include a Magnetic Fields installation that is rarely displayed in public, and forests of his signature work, Signals.

As one of the 20th century's most innovative artists, Takis has worked in multiple media, employing magnetism, light and sound over the more than 70 years he has been creating art. His work extends to jewelry and several of his pieces are offered in Sotheby's Jewels & Watches Online sale, open until 20 June, including a stunning gold and diamond necklace.

The Tate exhibition, which will run until 27 October, has been co-curated by writer and curator Guy Brett, and Michael Wellen, Curator, International Art, Tate Modern, with Helen O’Malley, Assistant Curator, Tate Modern. Organised by Tate Modern, it is a collaboration with the Museu d’Art Contemporani de Barcelona and the Museum of Cycladic Art, Athens, where it will travel to after the Tate exhibition has closed.

The self-taught artist, born in Athens in 1925, has long been respected globally as a pioneer of sculpture, most famously creating his antennae-like works called Signals, inspired by the urban environment of a Calais train station. The renowned Signals London gallery and publication (1964-66) took their names from this important series, which was often used by Takis to make political points, as he repurposed materials ranging from surplus military objects to bomb fragments.

His experimentations with sound in the late 1960s will form the centrepiece of the exhibition – a gallery housing the artist's Musicals – while an expected highlight of the show will be Magnetic Fields, an example of his telemagnetic works. Created in 1969, it will be on display for the first time since the 1970s.

Sotheby's is a proud sponsor of the Tate Commission 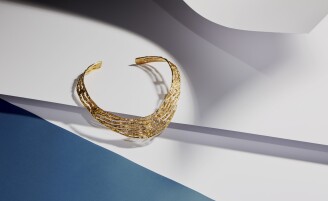