“I have been inclined to regard the Surrealists as complete fools, but that young Spaniard with his candid, fanatical eyes and his undeniable technical mastery, has changed my estimate,” wrote Sigmund Freud after meeting Salvador Dalí in London in 1939.

Painted in 1934, only a few years before their encounter, Moment de Transition, is a remarkable example of Dalí’s genius for giving form to the intangible images of his subconscious—the very talent which so impressed the psychoanalyst.  Discussing the origin of the phantom-cart depicted in Moment de transition, Michael R. Taylor explains that Dalí based this composition ‘on his memory of a childhood journey in a horse-drawn carriage to the Pichot family’s farmhouse, called El Molí de la Torre (or Tower Mill), just outside the artist’s hometown of Figueres, which he remembered slowly approaching at sunset’ (Dalí, The Centenary Retrospective (exhibition catalogue), Palazzo Grassi, Venice & The Philadelphia Museum of Art, Philadelphia, 2004-05, p. 200).

One of the most arresting paintings of this period, Moment de Transition will be offered as a highlight of the Surrealist Art Evening sale in London on 1st March.

Framed by the rocks of a Catalan landscape on the left and right, the focus of the composition is on a horse-drawn cart approaching a small town seen in the distance. At closer observation, however, the wheels of the cart appear to be no more than two sticks stuck in the ground, and the rider is revealed to be one of the buildings in the distant town. Dalí introduces a disquieting sense of doubt and confusion in the viewer, whose experience in looking at the work is akin to seeing a mirage or hallucination.

The combination of eerie dreamscapes with hyper-real figural elements exemplified by Moment de Transition, has become not only emblematic of Dalí's own unique style, but also synonymous with Surrealism. Indeed, Dalí’s exploration of illusory perceptions in the present composition remarkably anticipates a later project with another creative personality, Walt Disney—a collaboration that would earn an Oscar nomination decades later.

A dreamer (Disney) and a Surrealist (Dalí), each dealt in the area between reality and imagination, between what is and what might be. They met in 1945, at a Hollywood party held at studio executive Jack Warner’s house. This was the year that Hitchcock’s Spellbound, a thriller containing segments of Dalí’s work as a live action dream sequence, was released. Using imagery more akin to the realm of dreams than reality, Dalí’s unique interpretations of the unconscious mind resulted in a visual vocabulary that fitted perfectly with the new developments in film technology. United by a shared love of animation, it was perhaps inevitable that Dalí and Disney should come to a creative understanding.

The first cinema in Dalí’s hometown of Figueres had opened only seven months after he was born and film proved a constant inspiration for his creative processes; one that famously resulted in the 1929 silent surrealist short film Un Chien Andalou on which he collaborated with the director Luis Buñuel. In 1937, only three years after painting Moment de Transition, Dalí travelled to Hollywood with an eye to applying his distinctive style to the moving image once again. There, Dalí wrote to his fellow Surrealist André Breton, that the influence of the Surrealist movement had become so ‘enormous’ that the ‘creators of animated cartoons are proud to call themselves Surrealists.’ Years later, he was to comment that he had, ‘…come to Hollywood and [was] in contact with the three great American Surrealists—the Marx Brothers, Cecil B. DeMille, and Walt Disney.’

By January 1946, Dalí had signed a contract with Disney. The particulars of their agreement were never publicised and Disney would only remark that Dalí ‘…was expensive.’ In turn, the artist applied himself to the project wholeheartedly, reportedly keeping desk job hours from nine to five for three months. The result was a short film called Destino which is told against the backdrop of the same Catalan landscape evoked in Moment de Transition. It is a tale of unconsummated love between a lithe human woman and Chronos (Time), who takes the form of an immortal man.

In the most iconic scene of the film, which was only released in 2003, we observe the woman dancing through a desert landscape almost identical to that featured in the present composition; such that the long dress of the female figure standing to the left in Moment de Transition hauntingly foreshadows the flowing hem of Destino’s dancer as she catches the eye of the mysterious male who then morphs into a baseball player—testament to Dalí’s propensity for combining the lyrical with the universal. The soundtrack to the film was written by Armando Dominguez, a Mexican songwriter, with the eponymous title track was sung by Dora Luz, a Mexican singer who had worked on another Disney project in 1944. According to Dalí, the film was ‘a magical exposition of the problem of life in the labyrinth of time.’

The metamorphic or transforming images seen in both Moment de Transition and Destino proved a pivotal subject throughout Dalí’s œuvre and formed an essential part of his ‘paranoiac-critical method’. Playing on the idea of the double image, Dalí’s paranoiac-critical method was designed to undermine empirical reality in a way that could be instantly and tangibly grasped.

In a lecture given at The Museum of Modern Art in New York in 1934—the very year he painted Moment de Transition—Dalí pronounced the following regarding his major themes and preoccupations at the time: ‘To understand an aesthetic picture, training in appreciation is necessary, cultural and intellectual preparation. For Surrealism the only requisite is a receptive and intuitive human being […]. The subconscious has a symbolic language that is truly a universal language for it does not depend on education or culture or intelligence but speaks with the vocabulary of the great vital constants, sexual instinct, sense of death, physical notion of the enigma of space – these vital constants are universally echoed in every human being’ (quoted in Salvador Dalí (exhibition catalogue), The Tate Gallery, London, 1980, pp. 15-16). 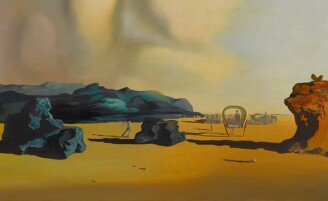