NEW YORK – Few individuals have shaped the market for Chinese antiquities as forcefully as the legendary collector, dealer and connoisseur Sakamoto Gorō (1923–2016). With a career that spanned almost 70 years, his journey to become one of the world’s greatest dealers of Asian art is as colourful and illustrative as the pieces he so admired.

Barely one day old when the Great Kantō Earthquake struck his hometown of Yokohama and rendered his father invalid, Sakamoto was born into a life of hardship and determination. His mother raised seven children on her own by walking to the countryside every day to bring back fresh eggs to peddle on her stoop, imbuing her son with qualities of ingenuity, discipline and hard work. After six years of elementary school, Sakamoto began apprenticing under a dried fish wholesaler. Determined to make it to the top, he dabbled in black marketeering after the war, before moving on to become a dealer in second-hand clothing, and finally, antiques.

Unlike his contemporaries, Sakamoto learned the trade through trial and error instead of apprenticing or inheriting a family business. He studied as many art books as he could and sought advice from renowned dealers, who were impressed by his pluck and courage. In 1947, at the age of 24, he set up his first shop in Tokyo. His journey was not without its challenges; he was confounded by imitations, and the first painting he purchased turned out to be a fake.

Yet, Sakamoto’s diligence, discriminating eye, and ability to forge long-lasting relationships soon propelled him to the top. Travelling the world seeking treasures, he broke the world record for the price paid for any Chinese porcelain in 1972, for an underglaze-blue and copper red Yuan dynasty wine jar. For this, he wrote in his memoir, he was willing to sell his entire shop and inventory, a testament to his doggedness and appetite for fine rarities. His purchase of the Yuan jar palpably increased the appreciation for quality in this market; prices that collectors were willing to pay for Chinese ceramics rose immediately afterwards.

Following the success of previous Sakamoto Gorō auctions, Sotheby's will offer a selection of early Chinese art from his unparalleled collection during Asia Week this September. Click ahead to see highlights from the upcoming sale, as well as some of the most impressive Sakamoto lots Sotheby's has sold in recent years. 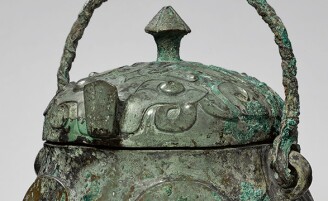