By Vivienne Becker
The Bourbon Parma family’s collection of jewels, including those once worn by Marie-Antoinette, connects us to the great rulers of the past 200 years.

I n the end, it was diamonds, not cake, that triggered the tragic downfall of Queen Marie-Antoinette and her family. Even though the hapless Queen was innocent of conspiracy, it was the affair of the diamond necklace that lit the powder-keg of revolution, so that her story is inextricably entwined with gems and jewels. It’s a story told in sensational style, with poignancy and power, through the spectacular collection of royal jewels from the Bourbon-Parma family, to be sold in Geneva on 14 November.

This is surely the most important collection of royal jewels to come up for auction in modern times, seen in public for the first time in 200 years. The jewels, more than 100 lots, chart the sweeping saga of a dynasty that connected the most powerful ruling families of Europe, popes, kings, queens, dukes and emperors, monarchs and nobles of France, Spain, Italy and the mighty Austro-Hungarian Empire. It is a collection that spans centuries, and styles, all set against the dramatic backdrop of history, a vast vista of world-changing events, and political and personal triumphs and tragedies.

I touched history, and felt the poignant thrill of its romance, as I tried on the ring bearing Marie-Antoinette’s diamond-set monogram...

Jewels have always been an essential part of the majesty of monarchy; symbols of power, courtly splendour and authority. Yet what is truly remarkable, and deeply moving, about this royal collection is its intimacy; while ravishingly, poetically beautiful, superbly crafted and set with exceptionally fine gems, these are above all intensely personal jewels, marking personal milestones, birthdays, births and marriages, and many of them, again remarkably, are closely connected to specific individuals, including Marie-Antoinette herself. “It is, “ says Daniela Mascetti, Deputy Chairman, Sotheby’s Jewellery Europe, “about touching history.”

I touched history, and felt the poignant thrill of its romance, as I tried on the ring bearing Marie Antoinette’s diamond-set monogram, on a ground of woven hair, a quiet jewel with immense presence. And along with the lustre of the breath-taking large natural pearl drop of Marie Antoinette’s diamond ribbon bow pendant, an auction highlight, I found the fascinating key to the story of the collection. It is believed to have been amongst the jewels, diamonds, pearls and rubies, that were packed up on a frantic night in 1791, in the Palace of the Tuileries as beleaguered King and Queen prepared to escape from France. The jewels, wrapped in cotton and packed in a wooden box, were sent secretly to Brussels, and from there to Vienna, into the safekeeping of the Emperor, Marie-Antoinette’s nephew. Much later, they were given to the King and Queen’s only surviving child, Marie-Thérèse de France, who bequeathed part of the collection to her niece, Duchess of Parma. The jewels were passed down through the generations to the present owners, taking with their scintillating thread of history and heritage. Pearls in the three-strand necklace, with its later diamond clasp, are thought to have belonged to Marie Antoinette, as are some of the diamonds in the parure, which includes a rivière-fringed necklace, of astonishing flexibility, and a dazzling cluster brooch. 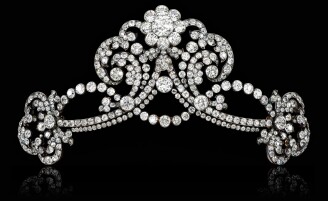 Stylistically, the jewels trace the evolution of great classics, bows, a crescent, clusters and, one of the most lust-inducing lots, a pair of 19th century diamond girandole earrings, that belonged to Marie Therese of Savoy, Duchess of Parma and look as modern and relevant today. Stylistically, too, the jewels make a fascinating link between French 18th century design and its revival in the Belle Epoque; as Mascetti says, Marie Antoinette’s diamond ribbon bow and pearl pendant could have been a model for Cartier’s celebrated garland style. A series of charming bow brooches meanders from the late 18th century, through the 19th century and into the Belle Epoque, culminating in an impressively regal diamond bow, rippling like a lacy diamond ribbon, and centred on a ruby and diamond cluster, made by Bachruch, of Budapest. This was given by Archduke Friedrich of Austria to his daughter, Archduchess Marie Anne of Austria, Princess of Bourbon Parma, on the birth of her son, Charles in 1905.

Several star jewels come from this period, including the diamond cluster ring, of circa 1910, set with an extraordinary apricot – coloured, orangy pink diamond, of 2.44 carats. At this point in the story, too, the scene shifts to Vienna, city of intellect, culture and beauty at the heart of Europe and the Austro-Hungarian Empire. A series of diamond jewels, including a lyrical openwork plaque brooch, and a spectacular tiara, were made by Köchert, the renowned Imperial court jewellers of Vienna. Which all goes to show that this is a once-in-a-lifetime collection of rich, ravishing, royal jewels, of historical magnitude, layered with style and deeply infused with emotion, poetry and poignancy. A rare chance to touch history. ◼︎