Roy Lichtenstein: By the Numbers

Roy Lichtenstein’s work is in the permanent collection of 79 institutions within the United States alone.

He completed 2 murals in New York City, which can still be seen today: at the AXA Equitable Center, and at the Times Square/42nd Street Station.

He designed 26 monumental public sculptures, several of which were fabricated and displayed posthumously.

In 2018, the Whitney Museum of American Art received a promised gift from the Roy Lichtenstein Foundation for over 400 works by the artist; this will make it the largest study collection of his work in the world.

Also in 2018, the Archives of American Art within the Smithsonian Institution announced a promised gift of over 500 linear feet of archival material from the Roy Lichtenstein Foundation. 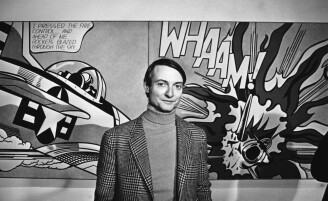