I n Good Will Hunting (Miramax, 1997), Robin Williams plays the part of Boston therapist Sean Maguire. When his new patient— the young but troubled genius Will Hunting, played by Matt Damon—arrives for his first session, conversation turns to a painting hanging in the office.

As Sean attempts to get to know Will, he asks if he likes art. "It's a real piece of shit," Will replies, spying the watercolor perched on the windowsill. "Uh, just the—the linear and impressionistic mix makes a very muddled composition. It's also a Winslow Homer rip-off, except you got Whitey uh...rowin' the boat there," Will observes. "Well, it's art, Monet...wasn't very good," Sean interjects. "That's not really what concerns me, though," Will continues. "It's the coloring." Sean, trying to conceal his increasing discomfort with humor responds: "You know what the real bitch of it is? It's paint by number." The watercolor was painted by the film's director, Gus Van Sant, and is now coming to auction.

The poignant interaction is one of the most significant scenes in the film, and Williams won an Academy Award for his performance, as well as a nomination for a Golden Globe. His certificates of nomination for both awards are on offer in Creating a Stage: The Collection of Marsha and Robin Williams. 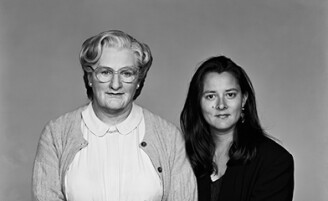 Auction
Creating a Stage: The Collection of Marsha and Robin Williams
Stay informed with Sotheby’s top stories, videos, events & news.
Receive the best from Sotheby’s delivered to your inbox.