“Art is an attitude, not an occupation. It’s about achieving excellence in any occupation, and then you can call it art.”

E arlier this month, Sotheby’s Hong Kong inaugurated its first virtual interview series featuring Beijing-based sculptor Ren Zhe – offering an insider’s look into the heyday of 798 District in Beijing, early inspirations, and the artist’s rise to stardom. Felix Kwok, Head of Sale and Director of Modern Asian Art Department at Sotheby’s, hosted the discussion Sculpting the Asian Spirit, the first of a new series of virtual events. As many stay-at-home orders are still in place in regions around the world, Sotheby’s teamed up with HSBC Private Banking in this exclusive interview. The one-hour webinar presents Ren Zhe’s perspective on the role of an artist, plus original ideas and insights from an emerging sculptor who has made phenomenal achievements in a short period of time.

Despite his youth, Ren Zhe is no stranger to the auction market. A sculptor with a deep connection to the history and culture of China, Ren Zhe is best known for his stainless-steel warrior sculptures that convey a sense of stillness and inner power. His works have won international awards and have been shown in solo exhibitions across the world. Last October, in 2019, the Palace Museum hosted a large-scale sculpture exhibition for Ren at the Imperial Ancestral Temple, and he was the first sculptor to present a large-scale solo exhibition in the Forbidden City. In Hong Kong’s, Exchange Square, Ren Zhe’s large-scale sculpture works were also installed alongside masterworks of Zhu Ming, Lynn Chadwick and Henry Moore.

“Once an artist has reached a certain level, when his artworks are seen in many places, he carries a mission towards society, as art is actually a philosophy. Most importantly, philosophy is about giving people a direction and leading them forward.”

Born in Beijing in 1983, Ren attended Tsinghua University’s Academy of Fine Arts Sculture Department, where he graduated with both a bachelors and master’s degree. From an early age, Ren has maintained fascination for heroic figures told in epic tales of mythology and antiquity, which have become recurrent themes in the artist oeuvre.

“When I was doing my graduation project, I was actually working on a set of Chinese chess,” Ren said. “At the time I was exploring the contemporary context of traditional Chinese culture. The entire art critique system including standards was built on western, or predominantly European or American, aesthetics. In the East, Asia has its own system. The two systems at the time were on parallel lines not to ever intersect each other. After my graduation I continued to think about this question in 798: how to describe and express something Eastern in a contemporary or international language.”

Through his work, Ren demonstrates a reverence for history and classical sculpture, bringing such aesthetics and philosophies together in contemporary artistic expression, notably in Soaring Aspiration and White Feather. His style speaks to the loftiest humanistic aspirations, representing the culmination of years of study in Chinese literary classics, music, calligraphy and painting.

“The Chinese literati’s fervent fondness for bamboo which is reflected in the warrior,” Ren said. “The sort of warriors in my works are not the slaying or conquering types. Both the eastern warrior spirit and the western concept of chivalry are more about one’s inner pursuit.” 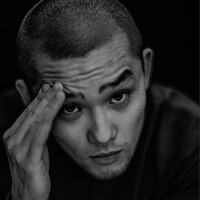 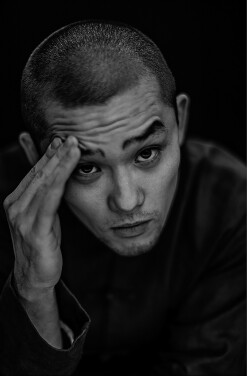 The artist’s vision in Chinese art forms are rendered in the abstract in physical concrete, stainless steel, or bronze. The transformation of tradition conveys a distinct timeless aesthetic and revives the language of sculpture.

At a moment when many of us are practicing social distancing and welcoming a connection to the wider world, the responses from audiences were overwhelmingly positive. The webinar was well attended with participants tuning in from all over the world and asking the artist many insightful questions. Sotheby’s looks forward to presenting more virtual events in the future and leading the way in bringing our community closer to art.