Remy Pollet and the Marriage of Old and New

"F rom my childhood, I have vivid memories of our family home and the way it was decorated. From a very young age, my attention was focused on objects and furniture from the 18th century, and I felt a special connection to them. The relationship with these objects would later resonate with my passion for the art of living.

At that time I found in my mother's painting studio a great deal of support: my mother would later defend my wish to pursue an artistic path. At the age of 18, I joined Vevey' School for Graphic and Photographic Arts while taking classes at the Beaux-Arts. Painting and Photography: two passions which would never leave me. To this day I continue to position these media alongside decorative arts.

In 1972, I created my first professional photographic studio to which I quickly added a painting studio. Associating decorative arts with contemporary painting and photography has nourished my passion as a collector for a long time. I've always been attentive to the union of styles to enrich my cultural universe. Since the 1990s, my pictorial work has been oriented towards monochromatic productions. Black and grey are predominant. Oil paintings, with their rich asphaltic textures, reflect my desire to make opposites co-exist: matte and shiny, opacity and transparency. Being sensitive to forms and light, I have found in my artistic universe an answer to this search for balance.

10 years later, Chinese ink guided me towards a new visual approach. Elsewhere I wrote that I found in it "a free expression that allows one to obtain remorseless, profound blacks, on chosen papers." (see Vibrations Rémy Pollet-Snel Editions-2016 ) Some of my exhibitions allowed me to gather my works and my taste for decorative arts. (Master Piece London, Fall show San Francisco, Biennale Paris, Brafa Brussels).

Together with Sotheby's 18th Century Furniture Department - which I thank for this collaboration - my aim is to associate furniture and works of art with groups of oil paintings and the Chinese inks on paper I have realised in my studio since the 1990s."

Sotheby's: How do you approach the association of a work of modern work of art with 18th century furniture?

Remy Pollet: The mixing of contemporary works with 18th century furniture is a matter of harmony and highlighting one in relationship to the other - broadening the field of vision and not limiting oneself to a sole era. This approach of associating disparate objects may seem inappropriate when compared to the time where having everything 18th century was considered “de rigueur”. If undertaking such associations in the context of a purely 18th-century ensemble often seems difficult or even risky, it's because the result will also depend on finding the exact balance between the objects, the furniture and contemporary works of art.

Each juxtaposition aims to highlight 18th century furniture, all the while imbuing it with a certain modernity through the use of contemporary works that bring it up to date.

Sotheby's: How do you integrate encre de chine drawings, just like black and white photography, elements so characteristic of your style, into your interior design?

RP: The monochrome that characterises all the works in encre de chine, the oils on canvas but also photography create a very interesting visual tension and contrast that work to enhance the gilded bronzes, marquetry, gilt wood, glasswareand so on of 18th century furniture. The juxtaposition of a chest of drawers in Chinese lacquer or with richly ornamented marquetry with an encre de chine, an "asphalt" canvas or a photograph gives me intense pleasure.

Contrary to the assertion that black necessarily gives off a feeling of darkness, in actual fact it is visually restful, contributing a sense of calm by its simplicity and its modernity. An ink drawing on paper allows one to associate the lightness and the abundance of the drawn lines with those found in the veins of marbles or with the transparency of the rock crystals used to adorn chandeliers. It is this same approach that sometimes leads me to place an encre de chine in an 18th century carved frame.

Black and white photography plunges me into another visual universe at the same time that it is able to harmonize with the setting from another era. It is part of the monochrome universe that I love.

S: Who are the 20th century artists whose work you find to be the most compatible with 18th century furniture?

Certain works by well known artists have contributed and influenced my artistic approach and
monochromatic aesthetic. The drip paintings by Pollock, the monochromatic works of the Korean painter Chung Chang-sup, the “Outrenoirs” of Soulage, the works in graphite of Choi Byung-so or the "Mouvements" works of Henri Michaux. My photographic inspirations include Irving Penn, Albert Watson, Richard Avedon, Anton Corbijn, Robert Mapplethorpe.

Remy Pollet’s works will be visible at Sotheby’s Paris during the Style sale from 29 May to 4 June 2020
and at his exhibition Résonances at the A&R Fleury gallery from 20 May to 20 June 2020. 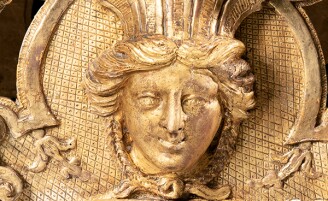