Many will recall Carol Ferranti and her store at the southwest corner of Madison Avenue and 72nd Street in Manhattan. The windows on both street sides were crammed with jewellery, ceramic and glass vases, shiny cocktail shakers, plastic cigarette holders, and amusing oddities of all sorts. The store¹s interior had very much the same appearance‹ a long counter case and floor-to-ceiling cases at the back. The jewellery could be gold or silver set with precious stones or it could be Bakelite. The criterion was that her things had to be well designed, witty and colourful. As much as Carol tried to style her displays, she could not resist adding more items until they were overburdened. "More is more" was her credo.

CAROL FERRANTI IN HER STORE ON MADISON AVENUE, CIRCA 1980.

Opening the store in 1975 was a major leap for Carol but, looking back, one can recognise that it was the natural culmination of a long process. She was born in New York in the 1930s, the daughter of real estate lawyer Peter H Brandt, who was a collector of Americana, books, paintings, and Orientalia. His wide-ranging tastes were a model that Carol ultimately followed. As a girl, Carol set her sights on a career in art, attending the High School of Music & Art in the Bronx and then, briefly, Syracuse University, which she left because she could not accept the restraints of the program. Instead, she became a colourist in the textile industry, traveling regularly to New England to work in the mills.

CAROL FERRANTI IN HER BOOTH AT THE MANHATTAN ART & ANTIQUES CENTER, CIRCA 1970.

Carol married young and had two sons, but soon thereafter she divorced. Needing to support her family, she began a modest antiques business, buying privately and selling at antique shows in Manhattan. It was at one of these shows in the mid-1960s that we met. Our conversation centred on a 1904 Van Briggle vase and continued well after the purchase was completed. Her charm and clever conversation won me over, just as they won over her many other clients.

Then, in the late 1960s when the Manhattan Art & Antiques Center opened on East 55th Street, she decided to take a booth there, making a full-time commitment to her business. Those were exciting times because the decorative-arts market was expanding: new collectors were emerging, and merchandise was readily available. Ultimately, Carol decided that she wanted to strike out on her own, and in 1975 she took a lease on the Madison Avenue store where she held forth for the next decade.

As much as Carol enjoyed being a gallerist, several robberies and rising rents on chic Madison Avenue discouraged her to such an extent that, not without regret, she decided to retire in 1987 and consigned her stock to auction. But a tranquil retirement did not suit her personality, so she took a position working as an agent for a Boston auction house, largely because she enjoyed the thrill of the chase.

All of this was Carol's public life. In her personal life, the dominant aspect was her extraordinary collection of Tiffany Studios lamps and objects, but few people knew this. In the living room of her Upper West Side apartment, which she remodeled while preserving its Neo-Gothic wood paneling and other original details, Tiffany lamps offered up shimmering colour and intimate pools of light in an otherwise dusky ambience. A grape chandelier hung low over her dining table. Glowing turtleback lanterns hung in hallways and even in the kitchen. They all created a magical environment. The butterflies and dragonflies in some lampshades, the tulips and begonias in others, all were at home against the background of the floral wall coverings. Her enamelled Tiffany boxes and plates sat on an elaborately decorated fireplace, and over that was an exquisite mirror decorated with lustrous glass balls and a six-branched candelabra. She adored the richness of organic details in Tiffany's creations.

When people asked Carol if she had things at home, she always said “no." Her lamps, inkwells and candlesticks were not something she wanted to share ­ not only to protect them from thieves but also to avoid over-acquisitive collectors trying to wrest her collection away. When she was photographed for a fashion website, she posed in a neutral corner of her apartment, next to a pink turn-of-the-century lamp and without a hint of the nearby Tiffany lamps. When she lent some of her enamels and other objects to the New York Historical Society’s exhibition on Clara Driscoll, she did so anonymously. Her collection gave her great pleasure, but it was always a private pleasure.

In her final days, Carol was comforted and sustained by the Tiffany collection in her apartment. Even if she did not go into the living room or dining room, just the knowledge that these objects were there cheered her. She would also be delighted by this catalogue, which serves as a memorial to what she had achieved.

Adapted from the catalogue for The Estate of Carol Ferrenti: Masterworks by Tiffany Studios. Click here for the full catalogue. 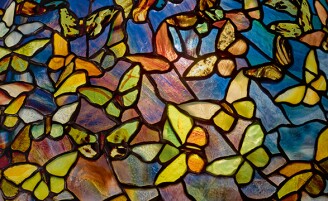 Past Auction
The Estate of Carol Ferranti: Masterworks by Tiffany Studios
6 June 2017 | 10:00 AM EDT | New York