Shape-shifting multimedia artist Rammellzee (1960–2010) was a cult figure of the Street Art scene and a hip-hop pioneer who left behind an astonishingly varied and influential body of work. Over the past few years, Rammellzee’s paintings, collages and sculptural creations have been exhibited at institutions such as the Museum of Modern Art, New York, and the Museum of Contemporary Art, Los Angeles. He is currently the subject of RAMMΣLLZΣΣ: Racing for Thunder a critically acclaimed exhibition at the Red Bull Arts New York (through 26 August). Discover more about the influential artist below and watch our video.

In the 1970s, Rammellzee’s graffiti art could be seen across the five boroughs of New York City. He made his name by tagging cars of the A train, the subway line that snakes from Far Rockaway, the Queens neighborhood where he grew up, all the way to the Bronx. By the early 1980s, Rammellzee was enmeshed in the Street Art and hip-hop scene which was gaining recognition among the Downtown Manhattan cognoscenti. In 1983, he recorded Beat Bop, a now-legendary rap 12-inch single, which was featured in the climax of Charlie Ahearn’s classic Wild Style, which helped to bring graffiti and Street Art to a much broader audience. The song was produced by Jean-Michel Basquiat, who was friendly with Rammellzee during the early part of his career, depicting him in Hollywood Africans (1983), currently in the collection of the Whitney Museum of American Art.

Before Basquiat – There Was Rammellzee

For inquiries about works by the artist or to learn more, contact us. 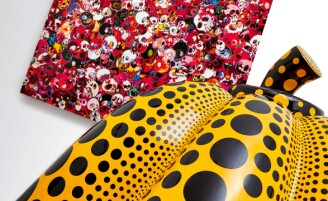