"The din of the dusty world and the locked-in-ness of human habitations are what human nature habitually abhors; on the contrary, haze, mist, and the haunting spirits of the mountains are what the human nature seeks, and yet can rarely find. "

Landscapes are not simply a representation of the natural world, they are spaces of the mind that express the ideals of social and political order. The works by certain yiming ('leftover subject') artists can reveal much of their times and still resonate with contemporary viewers. We take a look at one such work by Gong Xian (1619-1689), a painter from the late Ming and early Qing Dynasties.

The vast mountain landscapes in Chinese painting have evolved over centuries, revered by the literati-painter as the embodiment of a spiritual ideal as well as potent symbols of absolute harmony.

During the failure of dynasties, disillusioned court officials and scholars would withdraw from political life and seek communion with the natural world – the towering cliffs, craggy rocks and ancient trees together in a well-ordered universe offering proof against the impermanence of empires and bureaucracies. In the painting tradition there is a moral charge to the act of self-imposed exile and many of the scholar officials-turned-recluse are considered cultural heroes of their times.

The 17th century was a period of great turbulence beset by corruption at court, devastating natural disasters, popular uprisings, Manchu conquest, and the overthrow of the ailing Ming dynasty. To understand the anxiety that confronted the scholar elite during this period of historic conflict, we only need to look at the lives of the literati who were both witnesses and participants at the forefront of dynastic upheaval. Some would isolate themselves – e.g., Hongren (1610–1663) who became a monk in an act of defiance against the new regime, whose story and art we covered earlier this year. The master painter Gong Xian would take a very different approach of hiding in the anonymity of a city.

Gong Xian excelled at poetry, calligraphy, and painting, studying under the guidance of Dong Qichang. Gong Xian eccentric, preferring to find inspiration for his art directly from nature rather than from the emulation of great painting masters. During chaos in the final years of the late-Ming, he engaged in efforts to resist the Qing forces, living a nomadic existence without a home, drifting from place to place, and spending many years in hiding. With the establishment of the new dynasty, Gong Xian retreated into the mountains, eking out a simple life through teaching and selling paintings. In his art, he stressed originality and favouring contrasts to evoke a feeling of loneliness and desolation in his landscapes. 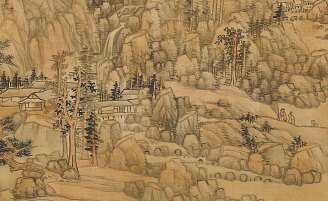