O ne of the highlights of the upcoming Contemporary Curated sale in London on 21 November is Store Vénitien, the first work by Belgian Pop artist Evelyne Axell to ever appear at auction outside her native country. One of the first female European artists to fully embrace Pop Art, Axell’s career was tragically cut short at the age of 37 and her work and contribution to early feminist art and pop art was subsequently ignored for decades. However, the recent acquisition by the Tate Modern of the artist’s 1966 work, Valentine, which depicts the first female astronaut to go into space, and its inclusion in the acclaimed The World Goes Pop exhibition alongside two of her other works, suggests a long overdue reassessment of her impressive oeuvre.

When Axell enlisted the famous Surrealist painter René Magritte as her private teacher, she already had a successful career as an actress and TV-presenter – but inspired by successful female artists like Yayoi Kusama and Niki de Saint-Phalle, and by the documentaries on Pop Art that her husband produced, she decided to turn to painting. Store Vénitien, which was executed only two years after she started painting, perfectly captures Axell’s exciting early work. Bright stripes of monochrome colour form the backdrop for the suggestive outlines of a female figure, which the artist cut out from a sheet of red-pinkish canvas.

The subject of the female nude is central in Evelyne Axell’s oeuvre, and is not just a reference to her early career as an actress and model, but also captures the sexual revolution of the 1960s and a new generation of feminists. As the influential art critic Pierre Restany observed: “The Belgian painter Evelyne Axell has joined the company of female power artists, with Niki de Saint Phalle from France, Yayoi Kusama from Japan, Marisol from Venezuela – and the list goes on. These women are living their sexual revolution as real women, with all the direct, unsurprising consequences: the other side is taking the initiative.”

Perfectly capturing Evelyne Axell's unique aesthetic and important contribution to 1960s art-history, Store Vénitien is undoubtedly a masterpiece from her early oeuvre. Having been included in the important exhibition at the Palais des Beaux-Arts a year after its creation, and having resided in only two private collections since, this is an outstanding painting by one of the key European Pop artists.

Contemporary Curated will take place in London on 21 November. 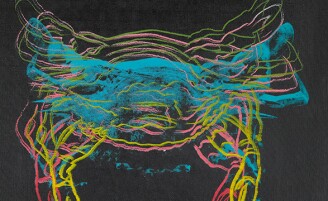