The Modern & Post-War British Art sale on 22 November is led by two impressive sculptures by one of the twentieth century's best known international sculptors, Dame Barbara Hepworth. Following on from our June sale, which saw Hepworth's sculpture Quiet Form (1973), achieve a new auction record for a unique carving by the artist of £1.8 million, works in the November sale span the course of two decades, from the late 1950s, with Curved Form with Inner Form (Anima), when Hepworth represented Britain at  the Venice and then São Paulo Biennale, through to the 1970s, the year that she conceived Parent I. Both works showcase the artist at her very best and both deal with her fascination with the pierced form.

As one of the most ground-breaking and forward-thinking artists of her generation, Hepworth carved a path as a world-recognised sculptor, a stature that no female artist had ever achieved. Parent I, which belongs to the magnificent group of nine sculptures produced in the last decade of the artist’s life collectively known as The Family of Man, brilliantly captures Hepworth’s skill and confidence as a sculptor, a feat celebrated in her 2015 Tate retrospective.

In The Family of Man Hepworth drew inspiration from the moments of her own life which bore personal significance, seen in the titles that she gave each form - Young Girl, Youth, Bride, Bridegroom, Parent I, Parent II, Ancestor I, Ancestor II and Ultimate Form – and central to this was the concept of motherhood and maternity.

This theme was one that had occupied her thought from an early stage of her career – much as it did her contemporary Henry Moore – and which led to the development of the Inside/Outside form relationship, showcased in her 1959 sculpture Curved Form with Inner Form (Anima). Here the maternal motif played alongside Hepworth’s fascination with the 'Wave' form, which she had first begun exploring in the early 1940s.

Both sculptures make use of piercing, with the striking circular holes becoming a dominating feature of both forms. It was in 1932 that Hepworth created her first pierced work carving, Pierced Form in pink alabaster (sadly destroyed in the Second World war) – and it was this that set her apart from many of her contemporaries as a leading light of European Modernism. The piercings in Parent I and Curved Form help to embody the otherwise bulky, lumpen bronze materials with a fantastic sense of life, rhythm and energy. Together these two works, both highlights of the sale, celebrate the principal themes of Hepworth's career with a freshness, balance and poise so wonderfully her own.

Join us at 4pm on Sunday 20 November at New Bond Street for a gallery talk with Alan Wilkinson, author of The Drawings of Barbara Hepworth. To reserve your place email rachel.davis@sothebys.com 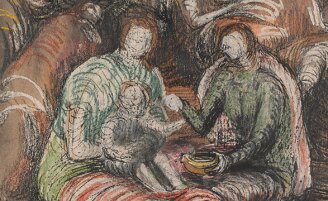