By Kenny Schachter
From 6 June to 4 July 2019, S|2 London will present an exhibition of works by Roger Hilton co-curated by Kenny Schachter. Special weekend viewing is open from 22-23 June, 12-5pm.

O n November 13, 1963, British artist Roger Hilton was awarded the John Moores award for excellence in painting in Liverpool. During the premiere, Hilton aimed a kick at “March 1963,” his winning submission; and, when presented with the prize on stage in front of an audience, said to Moores, “Give me the check, you look like a decaying oyster.” At the dinner reception following the ceremony, Hilton annoyed the local alderman he was seated beside, to the extent he literally keeled over into his plate suffering a heart attack. The headline read: Artist Kills Alderman!

Though Hilton (1911-1975) has had exhibitions at the Serpentine Gallery, ICA, Hayward, and Tate St. Ives, he’s hardly known in the UK, let alone internationally. Over the course of his career Hilton's canvases spanned from shards of dour colours mixed with graphite, which at the time constituted a departure from prevailing modes of abstraction, to childishly rendered nudes and animals. Part of the responsibility for the lack of greater acclaim stemmed from the artist’s notoriety as a rabid, destructive alcoholic the extent of which would give rise to Bacon and Freud or Emin and Hirst. That, and due to what amounted to his incremental, self-wrought suicide from drinking, his output was as prematurely curbed as his life—Hilton produced about 700 cavasses in comparison to Van Gogh’s 800 and Jean-Michel Basquiat’s 10,000 works including drawings (in 27 years). Speaking of works on paper, a cache of Hilton drawings, previously unknown, have recently been unearthed.

Hilton was something of a prickly, proto-punk, spewing bile to all that crossed his path which belied his niceness, humour and insecurity. Most importantly his work, even today, looks not only fresh and relevant to things being done by young, Yale educated market darlings (where students are taught to make exceptional “bad” art) but speaks to a contemporary, international audience far beyond that which the artist enjoyed during his lifetime. He went from being a celebrated British modernist of great acclaim to a bedridden invalid reduced to making modest sized drawings with gouache and poster paint. And what a sordid and soiled bed it was—in comparison, Emin’s acclaimed mattress resembles a Disney prop. But these pieces, a wonderful, ecstatic, raw and vital group of rediscovered works form the basis of this S2 exhibition. Better late than never.

We live in post Victorian times where everyone is quick to judge and moralize which allows less room for the frailties of human nature. It is somehow still barely safe to express issues relating to mental illness. This is exaggerated and exacerbated in the art world of today: populated by conservative, cottage industry entrepreneurs (or luxe behemoths like Murakami and Koons) where there is barely a trace of the life or death struggles that seemed to characterize art in times past—art has morphed into more of a strategical career course than a spiritual quest.

To make matters worse, in retelling Hilton’s story, it’s a messy tale with an ending far from happy; but, I feel we can more readily relate to the self-sabotaging actions, stutters, affronts, and contradictory behaviour than the unbridled ambition characterizing art now. Some people weren’t cut out for normalcy or, more basically, to be comfortable in their own skin.

We are in the midst of a market driven trend to resuscitate easy-on-the-eye abstractionists (and others) long forgotten or overlooked, typically accompanied by charming and endearing life stories (witness Carmen Herrera and Mary Coarse), versus the human Armageddon that was Roger Hilton. Hilton’s drawings were composed with an economy of line and means—there were no bells or whistles (few big flashy canvases, for instance). Yet, Hilton’s last body of work, on intimately scaled sheets of paper, were fresh, inventive and expressed an exuberance beyond the life lived by the artist. I love and am touched by Roger Hilton’s art—not enough people know about it but they should.

In an age of endless discussion of the extent of lies in the press, this is a warts-and-all tale of a personal and professional life for better and worse, addressing the context in which Hilton worked. Few of his relations among his peers—artists, dealers, curators and family members ended well. Also, in a more pragmatic sense, can history be revised in real time to broaden the scope of appreciation of Hilton’s works, both aesthetically and commercially (if this is even possible)? The show exposes the Hilton story to a myopic and generally closed minded audience more concerned with the latest art stars than their underlying talent (if any). 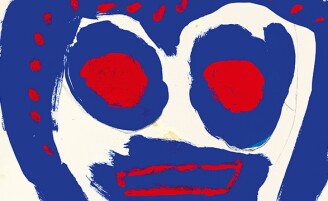