Moda Medici: A Lineage of Style

A s anyone watching the miniseries Medici: Masters of Florence on Netflix knows, the banking family appreciated lavish style. In this painting, the superbly dressed young lady, bedecked in exquisite jewels, is almost certainly Virginia de’ Medici, daughter of Cosimo I, Grand Duke of Tuscany, by his second wife, Camilla Martelli. A closer look at Virginia’s flawless getup reveals there’s more to this Florentine finery than at first meets the eye.

And anyone watching Medici also knows that for generations, relations within this family could be tense. Cosimo I’s children by his first wife, Eleanor of Toledo, were none too impressed by their stepmother. Camilla was heavily criticized for her vanity and opulent manner of dress, so different from their mother’s restrained and stately taste. And the 25-year difference in age between their father and his new wife probably did little to ease the consternation caused by her spending habits.

The siblings probably didn’t make life too easy for their stepsister either. Camilla had been Cosimo’s lover for some time prior to their exchanging vows, and Virginia, born out of wedlock, was only legitimized following the couple’s marriage in 1570. Unlike her mother though, Virginia is depicted in numerous portraits that survive today. In this and several other likenesses, she wears the same droplet earrings, pearl necklace and distinctive hairstyle. She also shows off a spectacular jeweled collare, or necklace, around her shoulders. The collare had belonged to Virginia’s mother, who received it as a gift from Cosimo. The jeweled piece is meticulously described in an inventory of Camilla’s possessions, drawn up at the time of Cosimo’s death in 1574 by his eldest son, Francesco, who succeeded him as Grand Duke. Art historian Simona Lecchini Giovannoni had recognized the collare as matching that worn in the only portrait thought to portray Camilla, a panel by Jacopo Ligozzi in the Uffizi in Florence. Virginia also appears to wear the same jewel-studded gown and poses in the same manner, with a handkerchief in her right hand, as her mother does in Ligozzi’s portrait.

Given the similarities between the two portraits, it’s not surprising that this one was mistaken for a likeness of Camilla when it was last sold in 2007. But a closer look at her style choices prove she’s of the next generation. Most telling is that the young lady wears her hair in a slightly voluminous style, not severely parted, with a dip at the center and adorned with pearls. This coiffure gained popularity in the 1580s, but well before it came into fashion, Camilla was, shall we say, out of the picture. After Cosimo’s death in 1574, Francesco, who had never accepted his father’s youthful second wife, ensured that the Medici houses Camilla had shared with Cosimo were closed up.  The majority of her clothing and jewels were confiscated and Camilla herself was confined to a convent for the rest of her life.

Why, then, would Virginia be wearing her mother’s necklace?  Well, despite this sentence, Camilla was granted permission to leave the convent on just a couple of occasions, one of which being the day of her daughter’s wedding in 1586 to Cesare d’Este, Duke of Modena (a pretty good catch for an illegitimately born Medici, I think you’ll agree). We know from Medici archives that as a gift for Virginia’s nuptials, Camilla gave her daughter the very same jeweled collare that she herself had received from Cosimo.

In a recent catalogue essay, scholar Elizabeth Pilliod asserts that this and a similar portrait sold last year at the Dorotheum in Vienna would have been painted in Florence. Since Virginia left the city for Modena following her marriage to the Cesare, it’s probably safe to say that this was painted as a wedding portrait and therefore dates to 1586.

Camilla may have been stripped of her finery and forced – according to contemporary letters quite literally kicking a screaming – into a life of piety, but at least her style lived on through her daughter.  And, if this is indeed a marriage portrait, Virginia makes a pretty bold statement to her family by so proudly displaying Camilla’s collare when sitting for it. But then again, who needs the Medici anyway, when you’ve got the Este on your side. 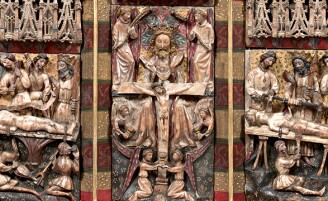