I t’s no news that Chinese collectors have come under the spotlight in recent years for their star-studded collections of both Western and Asian art. Now the trend has expanded to a new group of young art lovers. These emerging collectors are not only well-travelled, they're well-versed in the language of global trends, and their unique approach to art is defining new boundaries.

Street art and streetwear fascinated Carson Guo, the Chinese collector who recently purchased the complete collection of Supreme skateboard decks at Sotheby's, long before the auction. He followed major brands such as A Bathing Ape and Supreme, admired artist collaborations with high fashion names such as KAWS x Dior, and kept his eye out for interesting street art projects. He had even already collected some of the Supreme boards.

But then a friend told him that the entire 248 deck collection had surfaced. “Some were surprised that Sotheby’s was selling skateboards,” said Guo. “But to me it was very natural for an international brand [like] Sotheby’s to have insight into current trends and to be developing new concepts like this.”

During the auction, the entire collection was displayed in Sotheby’s New York galleries from 11–20 January, attracting fans of Supreme, streetwear, skateboard culture and contemporary art and design. A few days later, Sotheby’s and StockX celebrated downtown with a private reception and exhibition of contemporary artist collaboration decks from the collection. 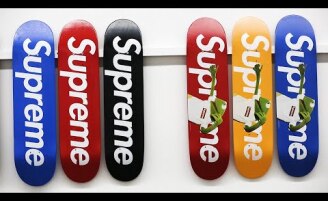 Diligently and passionately assembled over decades by collector Ryan Fuller, the Supreme archive comprises all 248 decks produced by the iconic streetwear brand between 1998 to 2018. For Guo, it was inspiring to see how Fuller worked so hard to complete the collection. “I saw the video on Sotheby’s website on the collector and his journey collecting the decks," he said. "It was fascinating.”

The journey was not without controversy, particularly in the set of three unauthorized Louis Vuitton monogram decks, released in 2000, which were recalled after only two weeks when the luxury brand threatened legal action due to copyright infringement.

But then in 2017, with the rise of streetwear as a major fashion inspiration, the two brands collaborated on the Louis Vuitton x Supreme collection that was introduced in Louis Vuitton’s Fall-Winter 2017 Menswear show. That collection included the Supreme Louis Vuitton Boite Skateboard Trunk, comprised of a deck, tool kit, trucks, wheels and shoulder strap. That set is part of the collection today.

Many of the decks feature artwork by some of the world’s pre-eminent artists. Two sets feature Damien Hirst’s iconic ‘spot’ and ‘spin’ techniques, respectively, both produced in 2009. And one of Guo's personal favourites is a five-deck group created in 2000 which features the central section of Leonardo DaVinci’s The Last Supper, with an additional sixth board depicting Jesus Christ released exclusively in Japan in 2002.

Ryan Fuller, who assembled the Supreme collection over decades, was thrilled about the acquisition. “I am extremely pleased with these results and the entire experience of selling my collection," he said. "I was able to meet and work with Supreme fans, collectors, and other amazing people throughout this process.”

Guo has not revealed too much about his plan for the collection, which will go on view at a new creative shop and collaboration space that he is opening in Vancouver, in 2020. But he did reveal that the spirit of collaboration will continue, notably with Hong Kong street artist Michael Lau. “It will be a space for exciting things to happen. And this archive will be part of it,” he said. For now, the decks join his art collection of work by Pablo Picasso and Claude Monet.