NEW YORK – Sotheby's upcoming Contemporary Curated auction on 29 September is highlighted by special selections from four guest curators who are among today's tastemakers in fashion, culture, design, art and more. Our curators offer their unique perspectives by choosing works from the sale that inspire them in a range of genres and price points. Read on to meet this season's group – Jonathan Adler, Jill Stuart, Isabella Lauder-Frost and Maxwell Snow – and to see which works caught their discerning eyes.

Maxwell Snow is an American artist born in New York City. His parents, collectors Chris Snow and Taya Thurman, surrounded him and his siblings with artistic inspiration as children. Snow can remember being taken to Merce Cunningham performances, visiting Robert Rauschenberg’s studio and enjoying the work of Renaissance Masters on trips to Italy. As a collector, he began with photography, but has become increasingly interested in figurative painting and works that defy easy categorisation.

As an artist, Snow is known for his signature black-and-white photographs, which are intimate, melancholic and at times as uncomfortable as they are sublime. During Hurricane Sandy in 2012, Snow’s studio in Red Hook, Brooklyn, was flooded and he lost all of his photography equipment. From this setback, he was forced to press the reset button on his practice, switching gears from photography to silkscreens on canvas. Beauty, fantasy, mortality, Americana and the metaphysical are all recurring themes. His work has been exhibited internationally. He currently lives in Wyoming.

Jill Stuart grew up in the world of fashion, taking after her parents who started Mister Pants, one of the first brands to make pants for women. While still a student at Manhattan’s Dalton School, Stuart sold her designs, featuring chokers and handbags, to Bloomingdale’s at the age of 15. After attending the Rhode Island School of Design she founded her eponymous line in 1993. Many pieces from her first womenswear collection were featured in the 1995 cult-classic film Clueless. Today, more than 250 freestanding Jill Stuart stores exist worldwide, with product lines that include ready-to-wear, cosmetics, fragrances, timepieces, jewellery, home goods and Jill Stuart cafes.

Contemporary art has played a prominent role in Stuart’s life, serving as a source of inspiration for her work. As a woman in the arts herself, Jill is often attracted to artists that incorporate femininity either as an expression of themselves or as their subject. This has shaped her own art collection, which includes major works by Cecily Brown, Lisa Yuskavage, Tracey Emin and Ghada Amer, among others.

Potter, designer and author Jonathan Adler is dedicated to bringing Modern American Glamour to your life. After launching his company in 1994, Adler’s desire to design all the elements needed to create a flawlessly chic home led to more and more. He now has a full lifestyle collection, including furniture, rugs, lighting, home accessories, decorative objects, bedding and more. Pottery continues to be the core of his business, and his commitment to impeccable craftsmanship and luxury is reflected in all he designs. His motto? “If your heirs won’t fight over it, we won’t make it.”

Adler’s work is featured in top restaurants, hotels and homes around the world. There are more than 25 Jonathan Adler stores worldwide, a robust e-commerce site and successful wholesale distribution that reaches more than 1,000 retailers globally.

Combining her art history background with an in-depth knowledge of the art market, Lauder-Frost has been at Helly Nahmad London for nine years. During this time at the gallery, she has worked exhibitions of Matisse, Monet and Picasso as well as such projects as "The Collector" at Frieze Masters last year.

Perhaps better known by her Instagram account @thingsizzyloves, when Lauder-Frost isn't attending an auction she is busy posting about her visits to myriad museums, foundations and commercial galleries across Europe and the United States. She is also on the committee of the Whitechapel Gallery's First Futures, and a supporter of other arts associations at home and abroad.

Lauder-Frost's own expertise lies in Impressionist, Modern and Contemporary art, as well as Picasso and art in the city of Paris between 1850–1970. She counts Cy Twombly, Jean Dubuffet, Alexander Calder and Sam Francis among her post-war favourites. 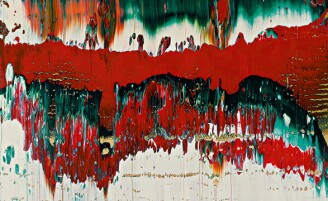