A n important ink and brush drawing by Henri Matisse will be offered in the forthcoming Œuvres sur Papier sale on 23 March in Paris. Considered to be one of the finest examples of the artist's last works on paper, Visage will appear at auction for the first time, having been in a private collection since its acquisition from the family of the artist in 1976. Drawing was always central to the artist's oeuvre, and whether working in oil paint, ink or collage, his exploration and representation of form needed very few marks to convey a powerful image. Characterised by calligraphic brushstrokes, the image bears the hallmarks of Matisse's assured brevity of line. As his daughter Marguerite Duthuit mentions in the certificate of authenticity, this work "…belongs to the group of the very last drawings by Henri Matisse."

In fact, by the latter half on the 1940s, the artist had largely abandoned painting because of the physical toll it begun to take. During this period, he has taken up residence at the Hôtel Régina in Nice, where he spent long periods bedridden, yet still compelled to make work. He turned his attentions to working with paper using different mediums, and most famously his colourful cut-outs. Many of these pieces were produced with the help of his studio assistants Lydia Delectorskaya and Jacqueline Duhême, who alongside offering practical support, sometimes posed for Matisse – becoming the subject of some of his most iconic portraits.

Visage hung on the walls of the hotel room Matisse called home for several years. This elegant large-scale drawing – thickly brushed in India ink – demonstrates his innate ability to capture the nuances of facial expression with a few strokes.  The viewer's eye is drawn immediately to the centre of the paper, locked into a confident gaze, accompanied by a wry smile. Visage is a testament to his long-standing fascination with the very act of drawing – stripped back to its purest form.  As the art historian Pierre  Schneider points out, the brush drawings of this period are in fact interchangeable with the paintings of the same name: "which only goes to prove they have the same identity. These large dazzling black and white sheets of paper are Matisse's last paintings" (Pierre Schneider, Matisse, New York, 1984, pp. 652-654).

A photograph by Lydia Delectorskaya taken in the rooms of the Hôtel Régina in 1952 shows Visage hung high in the top corner of Matisse's living room, above a frieze of paper cut-outs. On the subject of the 1950s ink and brush portraits, Matisse himself wrote: "These drawings spring up in one piece, made of elements without any apparent link with the analytic thought which preceded them. The multiplicity of feelings expressed in each of them seems impossible to capture so much the speed. ith which they join together is great. I am absolutely convinced that they represent the goal of my curiosity." 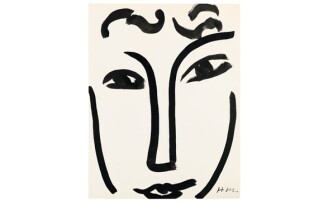