Mark Rothko: A New Master with a Reverence for History

I n the summer of 1959, Mark Rothko had a revelation. He was on the second of three long journeys he would take across Europe over 17 years, and he was enjoying a day trip to the ancient Greco-Roman site of Paestum. As he picnicked inside the ruins of the Temple of Hera II, two young Italian guides of his learned of his profession and asked if he was there to paint the temples. “I have been painting Greek temples all my life without knowing it,” the artist replied.

These words may surprise the many who think of Rothko’s large, shimmering blocks of colour that dominated his later career. But as the Mark Rothko exhibition at the Kunsthistorisches Museum in Vienna shows, not only did the artist spend his early years making figurative work, but he drew extensively from the past throughout his career. “The history of art is feeding into his creative imagination right to the end,” says the exhibition’s curator Jasper Sharp, “even in the works that appear to be resolutely modern.”

The show, which features 46 pieces created from the 1930s to the years leading up to the artist’s death, places Rothko’s oeuvre in the context of the museum’s extensive collection of antiquities and Old Master paintings. While Rothko himself only saw a selection of the Kunsthistoriches’ objects at the Metropolitan Museum of Art in New York, the exhibition has seen Sharp work closely with the artist’s son, Christopher Rothko, who considers the Kunsthistorisches a fitting venue. “My father, although he certainly looked a great deal at his contemporaries, was a great lover of historical art – art of the Renaissance, art of antiquity,” he says. “And I think this is one of the great collections in the world in both of those areas.”

Mark Rothko’s “great love” began in New York, where he emigrated to from Dvinsk, Russia (now Daugavpils, Latvia) when he was 10 years old. As a student in the 1920s, the then- Markus Rothkowitz would make regular visits to the Met, where he “immersed himself in all sorts of different departments and collections”, Sharp says.

Mark Rothko’s Mirrors of the Soul

Rembrandt struck the strongest chord. The Dutchman, Sharp explains, encapsulated “the drama of being a human being alive in the world, with all the joy and the despair that comes with it” – something Rothko strove for with equal intensity. The exhibition includes Rothko’s only selfportrait, and Sharp attests that “the body position, the palette, the temperature of the painting – everything screams Rembrandt”. So powerful was this influence, the curator argues, that Rothko carried it through his entire career. “We also have a beautiful abstract painting, made almost 30 years later [No.7 (Dark Brown, Gray, Orange)], which for me is every bit as close to Rembrandt as the portrait – in the colours, in the brushwork, and in the kind of inner light that comes out of the painting.”

“Rothko felt that he was simply the next evolutionary step from the great painters of the past.”

Throughout his career, Rothko sought a universal language that could help him engage viewers with what Christopher describes as “the great existential questions – ‘why we are here?’, ‘is there a God?’, and ‘what happens when we die?’”. To do so, he often turned to historical and mythical iconography. Works such as Portrait of Mary, 1938–39, Untitled (Woman Reclining on a Couch), 1938–39, and Room in Karnak, 1946, draw on Christian imagery and art history, echoing compositions by the likes of Old Masters such as Vermeer and Titian.

In a text he wrote, posthumously titled The Artist’s Reality: Philosophies of Art, Rothko expressed his love for the artist Giotto, who he admired for his use of sensual colour and tactility to attain an “ultimate pictorial truth”. “There is a temptation to see my father’s work as a real break with art historical tradition,” says Christopher. “In fact, he did not see it that way at all – he felt he was simply the next evolutionary step from the great painters of the past.”

It was in 1950, a year after he displayed his signature stacked-rectangle compositions, that Rothko made his first journey to Europe. Over the course of this trip, which focused on Italy, he would go from site to site “from dusk until dawn”, according to Christopher. The experience of seeing religious works in their intended context was to have an immeasurable influence on his artistic development. “Until that point, he’s seen art in museums but he hasn’t seen art in the places for which it was made,” says Sharp. “It gives him a sense of place, and when he comes back he’s already thinking: ‘what is the right place for my work?’”

This thought process, Sharp says, was on Rothko’s mind in 1958, when he received a commission for the exclusive Four Seasons restaurant in the Seagram Building in New York. “When the Seagram commission comes along he seizes it with both hands – it gave him a chance to measure himself against the great European artists who painted these locations.” Yet after returning from his second trip to Europe in 1959, where his experience of the Paestum was accompanied by visits to London’s Tate Gallery, Amsterdam’s Rijksmuseum, and the octagonal baptistry of Venice’s basilica di Santa Maria Assunta, Rothko withdrew from the commission – perhaps put off by the idea that his work would, far from decorating a sacred space, serve as “a backdrop to business deals”, Sharp says. The Seagram murals have instead ended up part of collections at the Tate Modern in London and the National Gallery of Art in Washington, DC – the latter’s examples have been loaned for display in their own room as part of the Kunsthistorisches exhibition.

Rothko’s desire to create a space devoted to engaging the viewer with these ideas never left him, and a second chance came in 1961, when he was asked to create a second set of murals, this time for a dining room at the Holyoke Center (now the Smith Campus Center) at Harvard University. In these paintings, with their bold, column-like forms, he was able to fully synthesise the lessons he took from his visits to ancient sites two years previously. “When you know what a lover he was of Classical architecture, and how he travels to Paestum to see the temples... and then you look at the Harvard Murals, for me it’s unmistakable,” Sharp says. “He is painting architecture.”

Three years later, Rothko was approached by the collectors John and Dominique de Menil about creating a cycle of works for a Catholic chapel in Houston, Texas. After a long period of planning and clashes with the original architect Philip Johnson, it was decided that the building would be an interfaith site next to what is now the Menil Collection campus. Rothko never got to see the Rothko Chapel, which opened in 1971, the year after his death, but it is widely regarded as his masterwork. This year it will be restored, letting new light into its octagonal layout, reminiscent of the basilica he visited in Torcello all those years ago, and onto its walls, filled with 14 dark murals demanding time and contemplation.

“It’s great that this person that took so much from these religious environments in Europe was able, in the most unlikely of places, to create a similar space for himself,” Sharp says. Rothko had finally built a temple of his own, and now it will be revealed in all its glory.

Mark Rothko is on view at the Kunsthistorisches Museum, Vienna, through 30 June. Sotheby's is a proud sponsor of this exhibition. 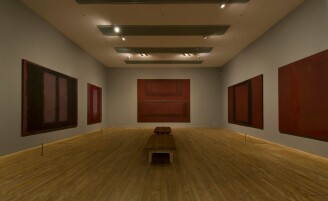