Mario Testino — Opening the Door to his Collection

Works from the collection of Mario Testino will be offered for sale at Sotheby's in London in September, allowing not only a glimpse inside one of the most diverse collections of contemporary art of recent years, but into the mind of one of the most visionary creatives working today. Included are works that span continents, themes and mediums from artists at the beginning of their careers, to the more established image makers of the 20th and 21st Centuries. Contemporary painting is strongly represented alongside photographic works, installation and sculpture — demonstrating Testino's voracious eye and passion for bringing together ideas and images from across an exciting spectrum. We sat down with him to discuss the next chapter in the life of these works.

When did you decide to let this selection from your private collection go, and why?

I want to take my museum in Peru, Museo MATE to the next level. To promote Peruvian art to the world, to put Lima on the map as a cultural destination, to instil dynamic education programmes and to bring international artists to Peru. What I've discovered is that life elevates you to a level where, all of a sudden, you have a lot of responsibility.

45 nationalities are represented, from big contemporary names to other more obscure artists… How would you define the common thread?

The important thing is that I collected these artists young – that's the common thread. The interesting thing for me was that I became so obsessed with it - that my buying was associated with making young artists stay alive almost, because I was buying them quite early on and betting on people that had no proof. My money was going into things that could make it or couldn't make it. But I was excited by the process with the artists, participating with the artist's career and development and growth. They also all surprised me with what they did.

There are over 300 works in the sale. Is there a piece to which you're particularly attached?

Too many! Richard Prince is somebody that really has influenced me a lot in the way that I think. The first piece of his that I bought was the biker girlfriend. I was really amazed by somebody who could find existing work and appropriate it. The idea of appropriation for me was a very new thing, because I've always been quite respectful about other people's property. But Richard made us look at things that we weren't looking at properly and that probably would have been forgotten. Without him saying: "Look at this" we wouldn't have looked at it.

However, I feel that it is time for these things to go and be lived by someone else. I feel I have consumed them and I don't want to hold on to things just because of their value or their historical value. When you close a door, another door opens, and I think it's important to let go, to allow new things to come in. 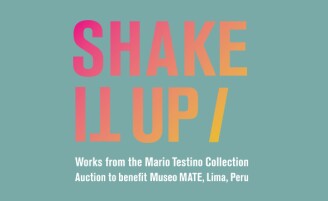