A fter almost four decades of collecting and dealing Old Masters, Otto Naumann is stepping down from his gallery space to allow his son, Ambrose, to establish Ambrose Naumann Fine Arts as a new venture. Mr. Naumann is selling his collection of paintings and sculpture, including Dutch, Italian, and Spanish masterpieces by Giovanni Baglione, Carlo Dolci, Bartholomeus van der Helst, Antonio Mancini and Joaquín Sorolla which have decorated his gallery space and apartment for years. The collection will be on view alongside our public exhibitions of Old Master Paintings and Drawings from 26–31 January 2018.

This group of property reflects my philosophy that condition and quality are the cornerstones for any collection, in addition to attribution and subject matter.

Dealing in fine art for over 30 years, Otto Naumann is regarded as one of the most respected figures in the international art scene. A celebrated scholar, earning his master's degree from Columbia University and a doctorate in Art History from Yale, Mr. Naumann is renowned for his exceptional eye for quality and for determining difficult attributions. In 1981, he wrote the authoritative monograph on Frans van Mieris (1635–1681) and helped organize the 2005 exhibition on the artist at the Mauritshuis, The Hague and in the National Gallery of Art, Washington. Having made a name for himself specializing in Dutch and Flemish art, Mr. Naumann expanded the breadth of his trade in 2007 to include Italian, French, Spanish and British works as well as 19th century painting.

George Wachter, Chairman of Sotheby’s America and Co-Chairman of Sotheby’s Old Master Paintings Worldwide, commented: “For the second time, Otto Naumann has chosen Sotheby’s to handle a distinguished selection of paintings and sculpture, some of which have been in his possession for the last two decades. This delightfully eclectic group, including works on copper, panel, stone and even glass, are fascinating in that they are all extremely high quality, in excellent condition, and exhibit Otto’s exquisite and world-renowned taste. It gives me great pleasure to offer our buyers this unique opportunity to acquire something very special, curated by one of the great dealers of the latter part of the 20th Century.”

Mr. Naumann noted: "I’m thrilled to be offering my collection of paintings once again at Sotheby’s New York, after the successful sale of my collection of Dutch & Flemish paintings and decorative arts in 2007. This present collection is more or less my entire inventory in Old Master and 19th century paintings, many of which have not been seen on the market for years. This group of property reflects my philosophy that condition and quality are the cornerstones for any collection, in addition to attribution and subject matter."

HIGHLIGHTS FROM THE COLLECTION

Giovanni Baglione’s impressive and exquisitely painted Saint John the Baptist in the Wilderness (estimate $400,000–600,000) is a recent addition to the artist’s oeuvre. The painting was rediscovered in a private collection where it had remained since 1970, bearing a later inscription in the lower right corner, reading CARRACCI. Despite the inscription, the hand was recognized as that of Giovanni Baglione, and the painting was sold with the correct attribution at Sotheby’s London in 2012. While in the hands of Mr. Naumann, cleaning not only revealed its rich surface and intricate detail but also the artist’s own signature and date, hidden beneath the old varnish: EQ IO. / BALGIONVS / .R.P.1610. Baglione, who had been knighted four years earlier in 1606, prominently proclaimed his title, EQ, a shorthand for Eques or “knight,” while the R.P. stood for “Roma Pinxit,” or perhaps “Roma Pictor.”

With its starkly lit figure and pronounced chiaroscuro effect, it is believed to be an early reaction to Caravaggio’s revolutionary style in Rome. Baglione's distinctive hand can be discerned in many of the details, from his characteristic way of painting the hands, feet and eyes, to the outlines of the nails. While he is known to have treated the subject of Saint John numerous times over the course of his career, the present work is by far the largest and most accomplished.

Joaquín Sorolla y Bastida’s Viejo castellano sirviéndose vino (The Old Man of Castille) (estimate $200,000–300,000) is one of a group of major life-sized figural compositions that the artist painted in 1907. This series can be divided into themes: portraits of Spanish royals, members of Sorolla’s family and, as with the present work, depictions of regional people. Sorolla began the series in El Pardo, north of Madrid, and later Segovia, before traveling further north to Léon, where he made extensive oil sketches and drawings of local life. These studies shaped the present work and others of the period, which demonstrate the artist’s interest in ethnography and variations in Spain’s regional dress, customs, and culture. The “old man” in the present work is enrobed by multiple layers of a heavy brown cloak, which frames his grey stubbled and sun-reddened skin, as a bandaged hand emerges to pour wine from a green and yellow glazed clay pitcher. Beyond its impressive technique and scale, this monumental portrait of the common man connects Sorolla to the foundational giants of Spanish art history, most notably Velázquez, who always sought ways to communicate the essence of his country in his art.

Giovanni Bilivert’s small-scale painting on copper, Venus, Cupid and Pan (estimate $300,000–500,000), with its highly-polished surface, displays the artist’s superb sense of refinement and delight in vivid colors. In this intimate painting we see Venus, the goddess of love, dipping her feet in a shallow, crystalline pond; naked save for her pearl headdress and earrings, she is assisted by Cupid, wearing only a silk sash, who tenderly washes her left leg. Standing in the background is Pan, who holds Venus’s crimson cloak and a shepherd’s crook, the attribute by which the god of the wild and protector of flocks is normally identified. Throughout the painting, Bilivert brilliantly conveys different textures; the fleshy body of Venus contrasts with the still-like water around her legs; whilst the sheen of her hair, like that of Cupid's, offsets the shiny pearls of her headdress. 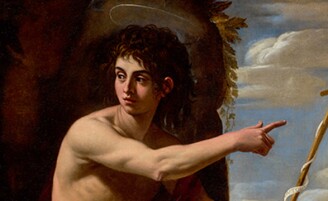