T hroughout his life and artistic career, Yves Klein pursued a path that led to immaterialism, towards the void. This intentionwas expressed in his “Architecture dans l'air”, a vision of an elemental architecture which was "flexible, spiritual, and immaterial," which he outlined during the Conférence de la Sorbonne on June 3rd 1959.

The “saut dans le vide”, a now iconic performance, was executed on October 19 on Rue Gentil-Bernard in Fontenay-aux-Roses, a suburb south-west of Paris where the artist regularly trained in judo. Yves Klein leaps from a pillar at the entrance of a pavilion, his face turned towards the sky, his arms crossed. Far from falling, the artist takes off. The street is empty, except for a cyclist passing by in the bottom right of the photograph. The fact that a man is hanging mid-air does not cause him to stop or even turn his head.

Today the painter of space must, in fact, go into space to paint, but he must go there without trickery or deception, and not in an airplane, nor by parachute or in a rocket: he must go there on his own strength, using an autonomous individual force; in a short, he must be capable of levitation.


Eager to immortalise the action, Klein invited his two favourite photographers to assist him: John Kender and Harry Shunk. It was they who created this photomontage in their Parisian laboratory, and published it for the first time on the front page of Klein's newspaper: "Sunday, the newspaper of a single day", on November 27, 1960.

Two years after the so-called exhibit “du vide” at the Galerie Iris Clert, Yves Klein did in fact take a leap, experimenting with the immaterial qualities of the void. Claude Parent, with whom the artist had the opportunity to collaborate on certain architectural projects, later confided “it was a question of a thought from within which he expressed by acting it out. In the 1950s, I was bracing against anything irrational. However, I shared with Klein two irrational moments: the encounter with gold and blue and… the Saut”.

The 1992 exhibit at the Galerie Montaigne dedicated to the immaterial work of Yves Klein featured photographs by Shunk and Kender, which represented a fundamental importance and conceptual milestone for photography within contemporary art. The same exhibit also drove Shunk to execute a limited edition of large prints for the first time only a year after his exhibit at the Kunsthalle in Basel, allowing the ephemeral and founding motions of the “Peintre de l’Espace” to take on all of their meaning. 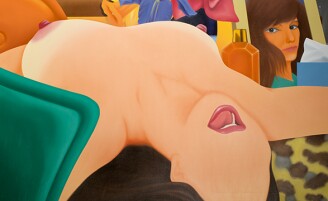